July 10, 2019 — The 2019 Wings and Wheels Fly-in and Car Show was staged under mostly sunny skies with just the right amount of a tailwind Saturday at the Florence Municipal Airport. Next door, the Oregon Coast Military Museum celebrated its fourth anniversary and provided historic context for many of the planes and vehicles at the show.

The 10th annual Wings and Wheels was billed as a tribute to longtime Florence-Siuslaw Lions Club volunteer and event organizer Mike Groshong, who passed away earlier this year.

The blue skies and the slight ocean breeze combined with a steady flow of visitors to make for a well-rounded and well received event that continues to grow in popularity and public support. Food trucks, informational booths and first response agencies Siuslaw Valley Fire and Rescue, Western Lane Ambulance District and Eugene Police Department Bomb Squad were on hand with informational tables

Planes from the Erickson Aircraft Collection in Madras, Ore., have provided unique planes for the event in the past. This year featured a World War II North American Aviation T-6 Texannamed after American pilot Norman “Swede” Ralston. Local car clubs and individual car owners were parked on the tarmac just a few yards from the collection of locally owned aircraft from different eras in the history of flight.

Groshong had been a member of the Florence-Siuslaw Lions Club for years and was often the public face of the organization’s charitable efforts. His particular passion was the Wings and Wheels event, which he had been coordinating for the past six years.

Groshong’s good nature, commitment and dedication to service were spoken of often during the day by his many friends and colleagues.

The new coordinator of the event, Ross Kroenert, worked with Groshong on the Wings and Wheels show for the past few years. Kroenert, who has been involved with the management of large-scale car shows, was pleased with both the turnout of vendors and visitors at the airport and the nice weather.

“It went great and went better than I had hoped,” he said. “It just went really smooth. All of the vendors and volunteers were here when the gates opened up and the airport gave us a little more space, so instead of 125 cars, we ended up with about 140. We had cars that were waiting to get in, so we were able to accommodate them.”

The unexpected loss of Groshong did add a somber element to this year’s event but also inspired the volunteers.

Kroenert said, “I met Mike five years ago when we moved here and I was attending the show. At that time, I told him that I had a lot of experience putting on car shows down in Southern California and I’d like to help him out in any way that I could, so I’ve been on his committee for the last four years.”

Earlier in 2019, he had a conversation with Groshong, who was staying at PeaceHealth Sacred Heart Medical Center at RiverBend in Springfield

“He said, ‘Ross, I don’t think I can do the show this year. Can you jump in and take it?’ ... So I said OK,” Kroenert said. “His last comment to me was, ‘We need to get together so I can talk to you about all of this,’ … and three days later he passed away.”

The sudden loss of the event’s coordinator a few months before a show that combined cars and airplanes, with little guidance from others, presented a challenge to the committee.

Kroenert said he realized that his best course of action was to adhere to the old axiom, “If it’s not broke don’t fix it.”

“We on the committee didn’t change that much from what Mike did. We tweaked it a little bit here and there, and we brought in a few more vendors in the past, but this was Mike’s baby. We are just adding to it and pushing it forward,” he said.

The overall goal of the Wings and Wheels event is to raise money for the Florence-Siuslaw Lions Club and the charities it supports. Two of the main areas Lions members across the country and across the world have attempted to positively impact is vision and hearing.

Internationally, the Lions Club was formed in Chicago in 1917 and currently has 1.7 million members in 46,000 local clubs working to help disadvantaged individuals see and hear. The group’s motto is simple — “We serve.”

This service most often takes place because of financial support from local businesses.

Kroenert found the good will engendered by Groshong over the years made the financial aspect of his new job easier.

“It really is a tribute to Mike how the businesses in the city turned out in support of the event this year,” he said. “As soon as the business people understood this year is in memory of Mike, the support was overwhelming and a lot of that is because people just loved him.”

One special moment dedicated to the memory of Groshong took place on Saturday afternoon, which was initiated by a family member.

“Mike’s brother Bill Groshong is a pilot and he coordinated with two other pilots from Eugene to do the ‘Missing Man’ flyover as a tribute to Mike,” Kroenert said. “Mike was just a great guy. If you talked to him you’d think the guy never had a bad day. He was always smiling, generous and he loved the Lions and his car guys and gals and they loved him. We sure will miss him.” 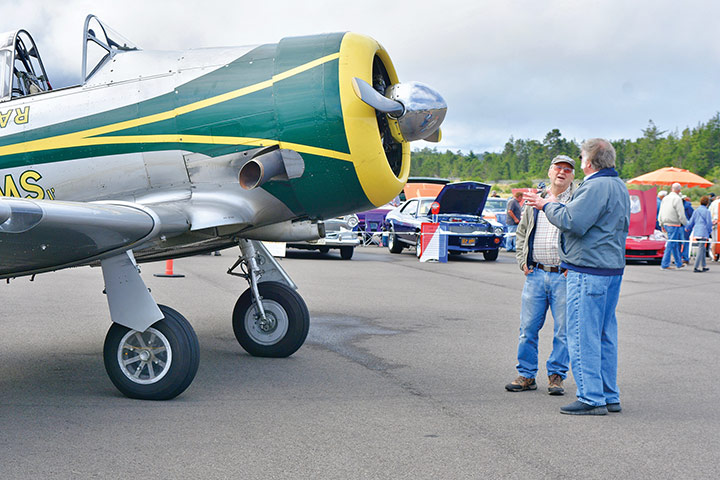 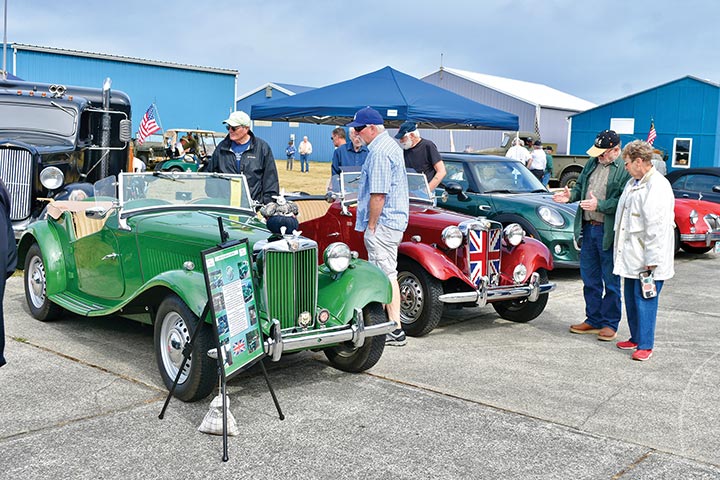 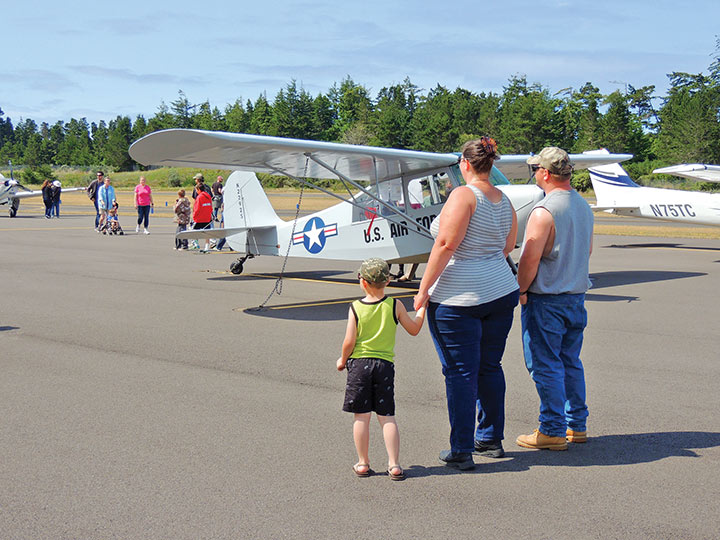 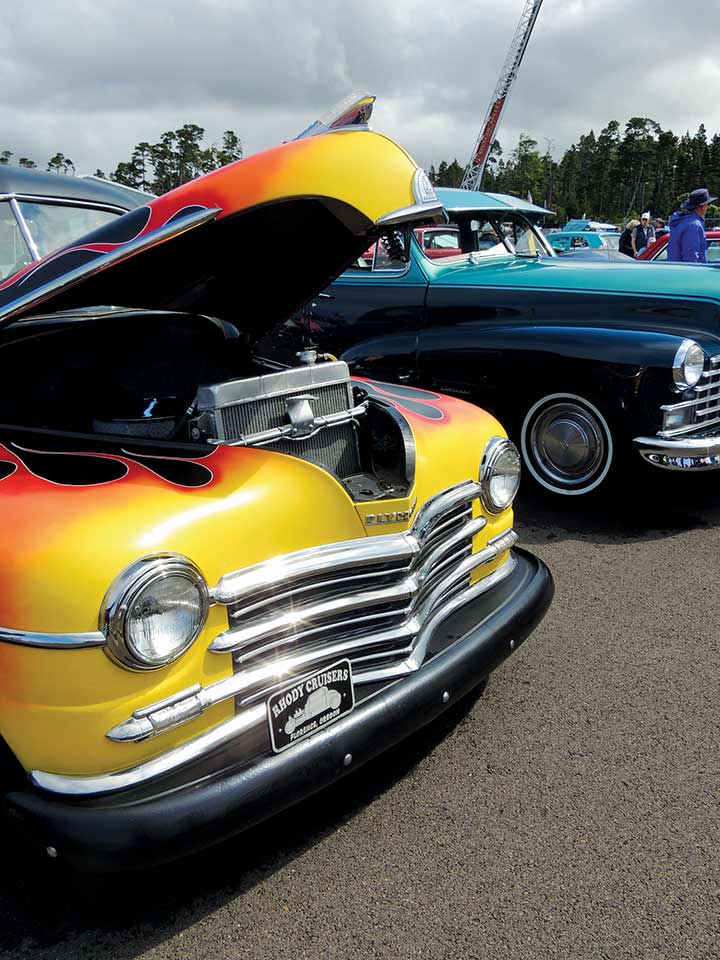 ‘The coast has been relatively unscathed…’