Viks get pins, fans get loud at Lutz

Jan. 18, 2023 — The Siuslaw wrestling team’s biggest event of the year had its return to glory on Jan. 14 when 25 boys and 18 girls teams converged on Glenn Butler Court in Florence for the Nick Lutz Memorial Invitational.

After the 2021 event was lost to COVID the tournament returned last January but almost half the teams were forced to cancel, again fighting illness. This year the gym was packed with a full slate of teams from all classifications throughout Oregon.

A nearly packed house with, at times, four matches happening simultaneously created a loud and exciting scene that came to a crescendo with the finals in each weight class — with six Viking wrestlers reaching the finals mats. As each match began, dozens of Viking fans left their seats in the bleachers and circled the mats just feet away from the action, adding to the intense atmosphere on and around the mats.

First up were the girls.

After a first round bye and a semifinal win, freshman Macali Lade was the only female to compete for a first-place medal, which she won after beating Ellie Morton of Philomath.

According to Lade, the support from the home crowd not only helped motivate her but also made it all the sweeter each time she successfully executed a good move on her opponent.

“I always love home tournaments and duels, mainly for the amount of support and positivity that fill our gym walls,” Lade said after her win. “It always feels good to hit a nice shot or get out of a difficult situation and just hear everyone going wild.”

In addition to Lade’s first-place medals, the entire girls team contributed to the second-place team trophy, with every wrestler who entered contributing at least a few points. 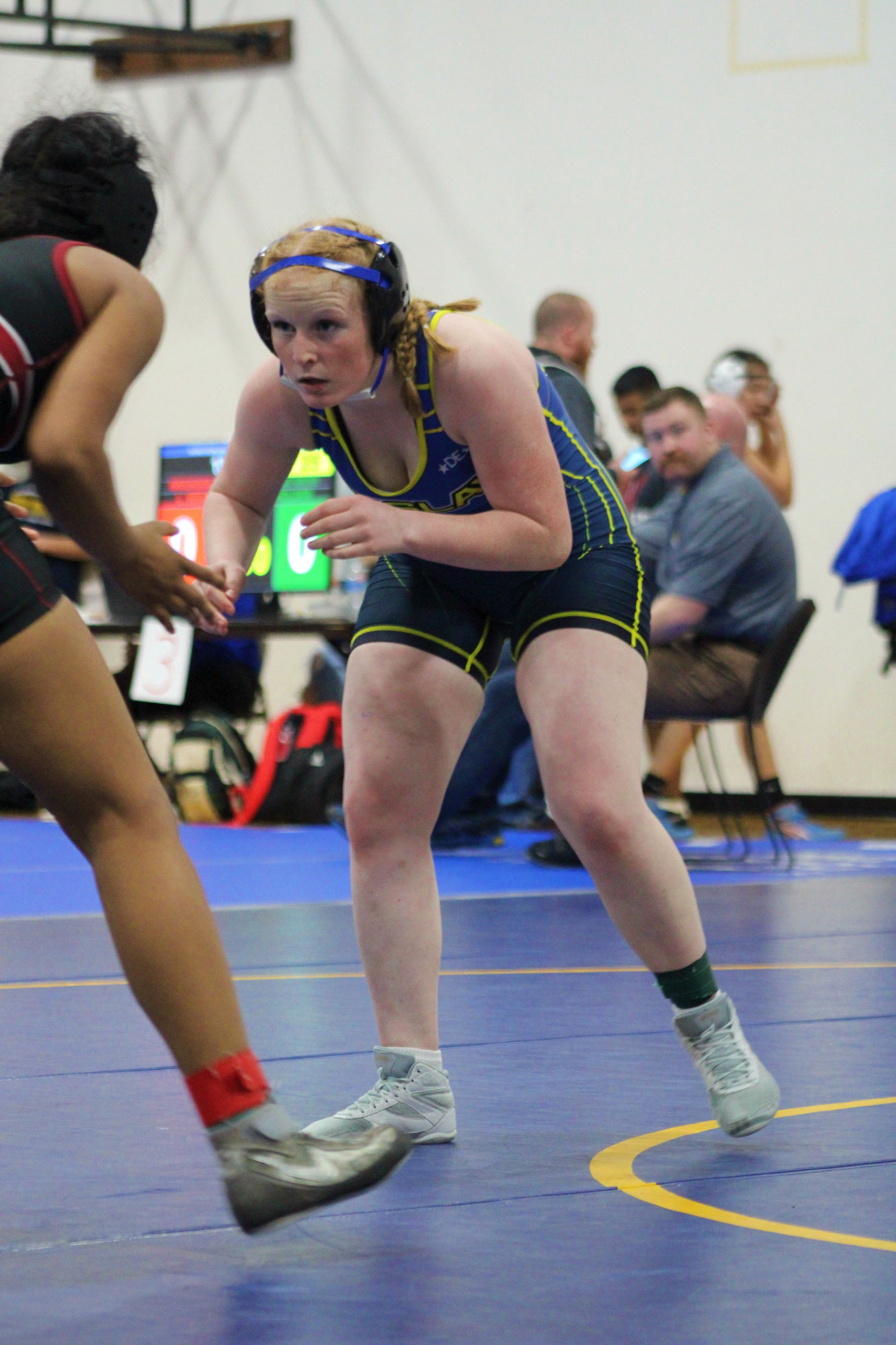 Lakeview was at the top of the girls standings with 71.5 points. After the Vikings (66) was the North Bend Bulldogs with 60 points.

The highlight on the boys side may have been the return of Hunter Petterson. The senior had missed the last month on the mats, which wasn’t easy for him.

“It was rough,” recalled Petterson. “As much as I love to see my teammates succeed it was so hard to not be able and be on the mat with them. Though it was nice that I had the chance to watch and cheer them on.”

His return was a success as Petterson was one of five Viking boys to bring home gold. He pinned his way through four opponents for first place in his division.

Petterson was thrilled that he was able to make his return at home.

“After not stepping on a mat for a month, to get the chance to make my return at home in front of so many friends and people behind me felt amazing… just simply amazing,” he said.

Another impressive performance was that of freshman Jacob Mann, who continued his meteoric rise up the ranks in his first year of high school wrestling.

After a first-round bye and two wins by fall, Mann met Brazen Ellis of Pleasant Hill in the 182-lb. finals. According to oregonwrestling.net, Ellis was the No. 2-ranked wrestler at 195 pounds in the 3A division coming into the event.

The match went back forth, but Mann built a lead by the end of the final period and beat the much more experienced wrestler, 12-5.

As the result of his impressive performance, Mann was selected by the coaches as Outstanding Wrestler for the Nick Lutz Memorial Invitational.

Awards are nice but Mann has big dreams for the season and knows he will often be in the situation he was at the Lutz, where he’s facing much more experienced grapplers.

“I have goals of becoming a state champion but as a freshman in a junior- and senior-dominated weight class, I’m taking one match at a time,” said a cautious Mann.

Another reason for Mann’s early success is his exposure, at practice, to more experienced wrestlers like seniors Dayne Muller and Mason Buss.

“I’ve wrestled with Jacob Mann my whole life,” said Buss. “It was nice to see him win Outstanding Wrestler.”

Buss and Muller didn’t do so shabby themselves on the mat, both also earning first-place medals at the event.

Buss, oregonwrestling.net’s top ranked wrestler in 3A at 195 pounds, continued his stellar season. He pinned all four of his opponents to keep his season-long undefeated streak intact at 24-0, a streak he hopes to continue.

“My goal this season is to go undefeated and win a state title,” said Buss.

Muller only needed two matches to claim his gold medal, another step toward his personal and team goals for the season. He likes the way things are progressing.

“My goal is to be a state champion,” said Muller. “To bring home the gold. We have a young, dedicated team with superior coaching. I see more and more success coming our way.”

The final first place finisher for the Viks was sophomore Joel Sissel, who pinned his way through four opponents for the gold. Though it came with a little added pressure, Sissel also enjoyed the chance to compete in front of familiar faces on the mats at Glenn Butler Court.

“Wrestling in front of home fans makes me a little more nervous but, when I win, it makes it even sweeter to share my success with my community,” Sissel said.

While junior Derrick Vanduch was the only other placer for the Siuslaw boys with his sixth-place finish, the Viks also got points from freshman Jaxon Chiang and sophomores Terry Elliot and Kenden Huff.

The event was created to honor former Siuslaw wrestler and 2005 state champion Nick Lutz, who perished in a tragic accident while fishing in 2009. Many wrestlers on this team grew up watching athletes they admired wrestling in this same tournament.

“It meant a lot to me to wrestle in the finals,” explained Buss. “I watched my brother win the Lutz 10 years ago when he was a senior.”

Next up for the Viking wrestling team is a three-way dual meet in Sweet Home tonight, followed by the two-day Bay City Duals at Marshfield High in Coos Bay Jan. 20-21. Start times for both events have yet to be announced.

Regardless of what comes next for the Siuslaw wrestling team, they are in it together.

“The team this year is like family,” said Lade after the Lutz. “We support each other no matter what.”