By: By Zac Burtt/Siuslaw News and Kyle McGowen/Cottage Grove Sentinel - Updated: 1 week ago

SHS boys in hunt for playoff spot at halfway point

Jan. 25, 2023 (Florence) - As the Siuslaw boys basketball team approaches the halfway point of the Mountain Valley Conference season, it is still searching for consistency. After a midweek thrashing at the hands of the league’s top ranked team, Creswell, the Vikings bounced back when they returned home on Friday to beat Elmira in resounding fashion.

First, on Jan. 18 the Vikings traveled to Creswell for a match-up with the Bulldogs, the team at the top of the league standings.

The Bulldogs played like a first-place team from the opening tip. Creswell used a fierce full court press and backcourt traps to force a mixture of two 10-second violations and a number of steals to race out to a 19-2 lead.

The second quarter was more of the same as five different Bulldogs scored in what was, according to their coach, one of their best starts to a game this season.

“I thought our first half was probably the best half of the year,” Creswell coach Jesse Thomas said. The ball movement, the rebounding and the defensive energy were great.”

The Viks were able to close within 13 (41-28) in the third quarter after 3-pointers by Allen and junior Andrew Jensen-Norman, but the Bulldog press continued to be a problem for Siuslaw, which fell short, 56-38.

Jensen-Norman led the Vikings with 13 points in the game. Allen added 10 points of his own. Creswell’s senior guard Max Velarde led his team to victory with 25 points on 9-of-11 shooting on the night. 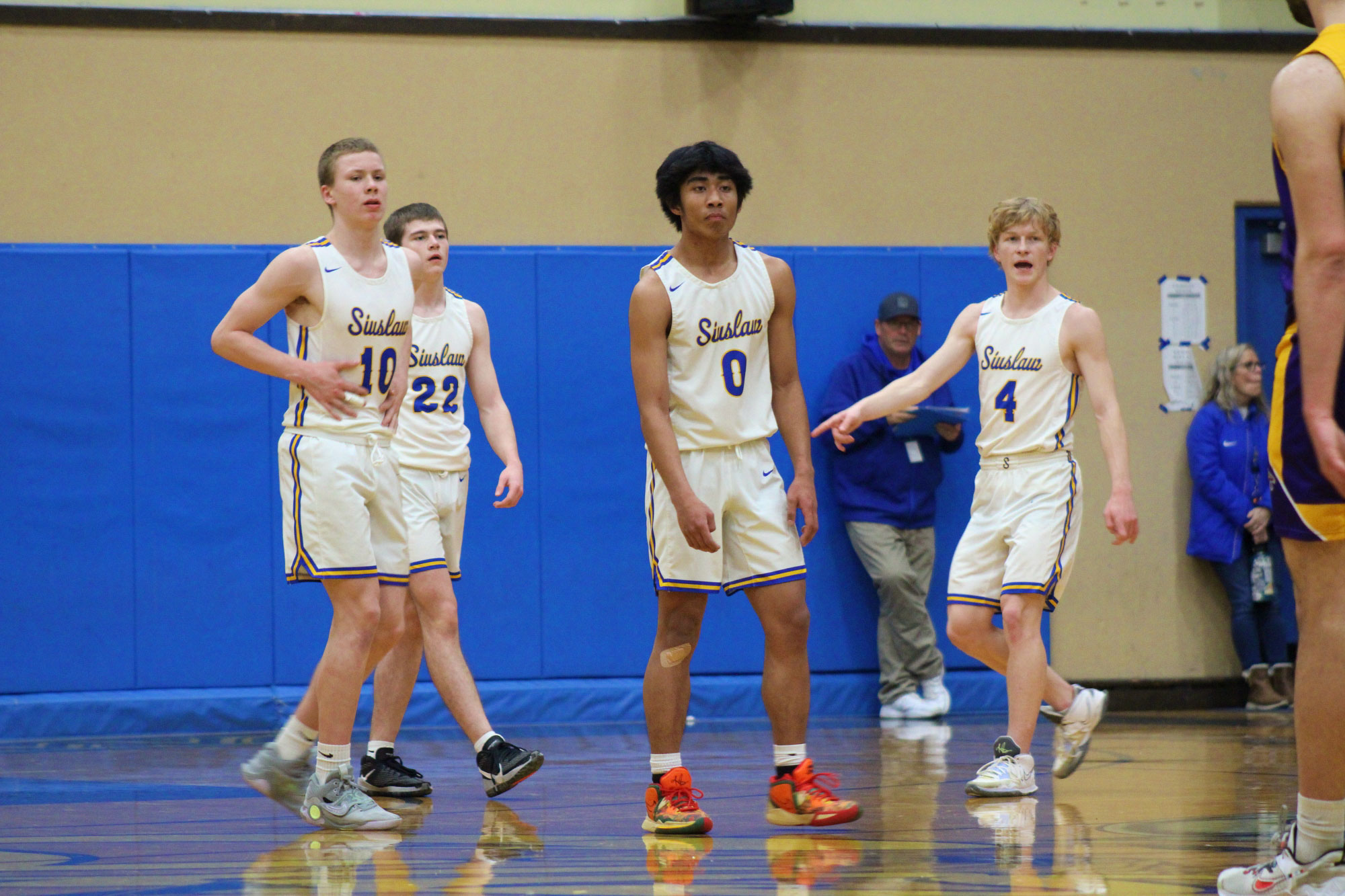 Two days later, Elmira came to the coast for a Friday night match-up with the Viks.

Siuslaw came out strong from the opening tip in front of an excited home crowd.

Siuslaw has struggled at times to break its opponents’ full court press this season. But against the Falcons, it was the Vikings’ full court press that was especially effective. Siuslaw forced numerous turnovers and built a 15-4 lead after the first quarter. That lead was more than the Falcons could overcome and the Viks won it, 51-30.

With the win, Siuslaw moves to 2-3 in league play and 7-10 overall. That 2-3 record puts the Viks right in the thick of the battle for one of the league’s four posts-eason spots. As of press time, SHS sits tied for fifth — but the Viks are just one game behind the teams tied for second: Pleasant Hill and Sisters.

Siuslaw’s next chance to move up in the standings was Monday, when they took on the Billies on the road (after press deadlines.)

The Siuslaw girls also had games against Creswell and Elmira last week.

Siuslaw scored on three out-of-bounds plays during the first half, but it was not enough to keep the Lady Viks in the game. It was 31-13 at the half but Creswell shut out the Viks in the third quarter 19-0.

The final score was Creswell 57, Siuslaw 16.

On Friday, the Elmira and Siuslaw girls played the second game of the evening’s twin bill.

The Viks lost 45-18 but Siuslaw coach Aaron McNeill was especially impressed by the play of one of his players.

“Makayla Bender had a great game scoring, leading the team with 9 points and 4-of-4 shooting from the free-throw line,” said McNeill. “Makayla also had 5 steals.”

Next up, this Friday the Viks begin the second half of the Mountain Valley season with a game against Sisters. Girls tip-off at 6 p.m., followed by the boys at 7:30 p.m.