Student who made threat could face expulsion and criminal charges

Jan. 15, 2019 — The Siuslaw School District was on alert Monday night as the district and local police responded to a threat of violence against students at Siuslaw Middle School and a staff member. However, the threat turned out to be a hoax and the district rescinded any safety notices regarding the incident by Tuesday morning.

The threat was made Monday evening at 5:48 p.m., according to school officials.

“The threat was made after school through an anonymous texting app., and directly related to those students,” Siuslaw Superintendent Andy Grezskowiak said Monday evening, stressing that the police were looking into the issue.

“The threat of violence, if it were to occur, would most likely be tomorrow [Jan. 14] when the students are at school.”

The family of any students named directly or indirectly were notified, as well as the staff member. Police began a quick investigation, and automated calls went out to all parents just before 7 p.m. on Monday.

“If you or your child may be able to identify the person that made such a threat, please contact the Florence Police with that information,” the district asked in the robocall, which also stated “an enhanced police presence” would be at the building and that all student bags would be searched prior to entry.

“If parents feel a need to keep students home on Tuesday, please call your child’s school to register the excused absence for the day,” the call stated.

By 11 p.m. that night, the perpetrator had been identified by police, who found no credible threat at the middle school or any other school facility.

“In essence, it was a hoax,” Grzeksowiak said. “The student does not have the ability or means to complete any threat but was ‘pranking’ their friends and it went too far.”

The district could not get a secondary robocall out when the threat was deemed moot, as the system was timed out until 6 a.m.

However, the district updated its website and mass emails went out late Monday night.

When school came back into session Tuesday morning, there were a few more absences than is typical.

“For students that did attend, it was school as normal, with a bit more additional chatter,” Grzeskowiak said.

The district worked swiftly to let students know what had occurred.

“Middle school students were taken directly to advisory class upon entering school [Tuesday] and addressed by staff about the incident,” Grzeskowiak said. “Then, students went on to first period like a regular day. Each school site had two Florence Police Department officers onsite for the morning and then as people were a bit more comfortable, some officers returned to their regular duties.”

As for the mood inside the school, Grzeksowiak said, “Some did express being initially scared. But when it was determined that it was a hoax they were relieved.”

The district is not able to release exact details of the threat, though Grzeskowiak was able to state that, “It was a threat to physically hurt the victims, possibly with some sort of weapon.”

Legally, the district is limited in the information it can release, including the name of the student and what type of disciplinary action the student would face.

“Since the child is also a minor, their name would most likely not be released by law enforcement,” Grzeskowiak said.

However, Grzeskowiak did state the incident will result in both discipline and legal issues for the student.

“The student is currently prohibited from campus, pending the outcome of an expulsion hearing, which will be scheduled at a later date,” Grzeskowiak said. “The potential disciplinary outcomes for this type of act could be suspension, assignment to an off-campus learning environment and potentially expulsion from school with no educational services provided by the district.”

As far as criminal charges are concerned, Grzeskowiak stated that will be handled by local law enforcement.

On Tuesday afternoon, the district released the following letter: 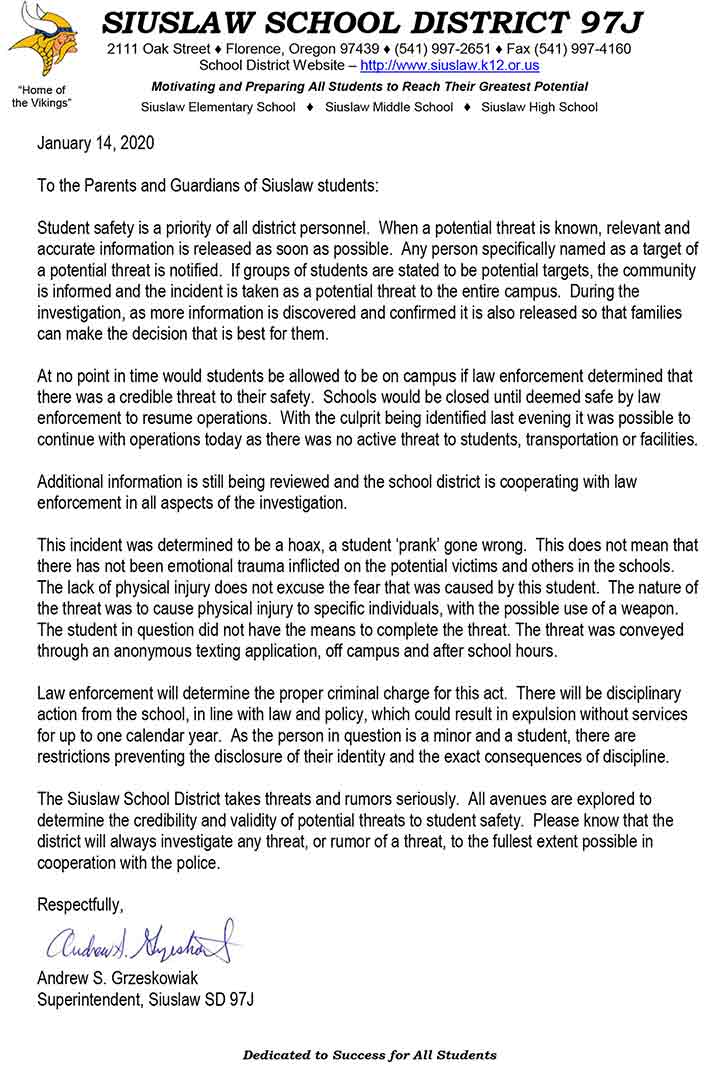