Since 2018, Rev. Fred Eishen Miller has been bringing people together for Soto Zen meditation in Florence. All people are welcome to his Zendo (or Zen Center) as Rev. Miller makes apparent the minute one enters the door.

Zendos, like the one that meets at Florence Unitarian Universalist Fellowship (FUUF), are located all over the world and the art of meditation has been practiced for thousands of years.

Soto Zen is a sect of the world-wide Buddhist community devoted to the realization of one’s own true self, through mindful meditation and the demonstration of compassion and loving kindness to all beings and the Universe.

All of this is based on the teachings of Shakyamuni Buddha.

Soto Zen was brought to the United States by Shunryū Suzuki. He came to San Francisco in 1959 and, since his arrival, it has spread to all corners of the country.

“He [Suzuki] launched a Buddhist revolution, or tidal wave I should say, within the United States,” said Rev. Miller. “Now there are Soto Zen Buddhist Centers all over the country. I don’t care whether its Rochester, New York, Miami, or Minneapolis, they’re all over.”

Soto Zen emphasizes proper posture, breathing and mindful peace. Meditation is the core of all Buddhist practice, and one could not receive a more welcoming introduction than the one provided by Rev. Miller and his group.

Before the weekly gathering on Jan. 10, a few newcomers arrived early for a short orientation from Rev. Miller. He also talked about some of the ways this zendo makes sure everyone feels welcome, like allowing footwear.

“Ordinarily in a zendo we don’t wear shoes,” explained Miller. “I don’t but most of my members at least wear socks because their circulation isn’t so good. If you were in a far more formal zendo and a different demographic, everyone would be barefoot.” 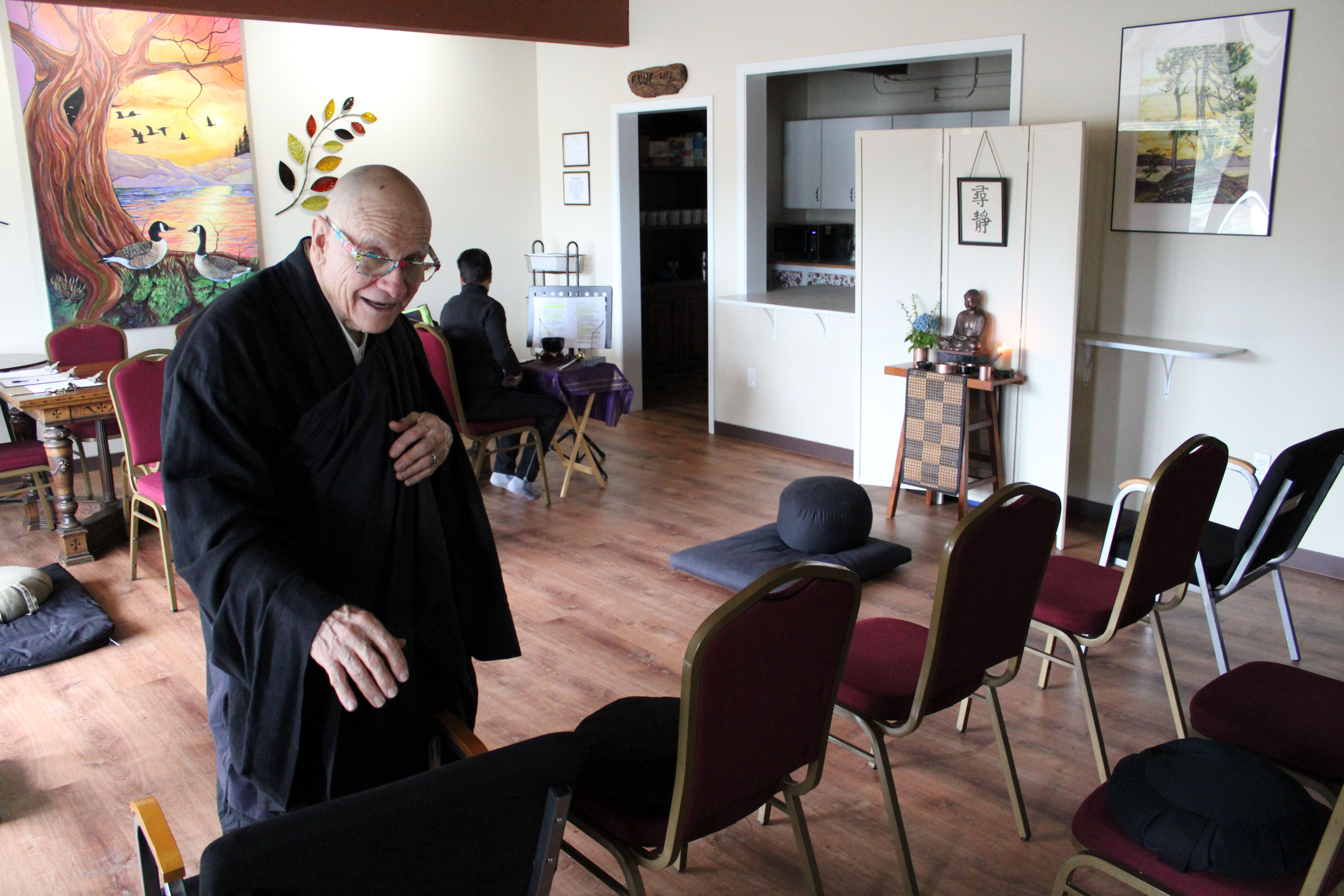 According to Rev. Miller, the important thing is that everyone and anyone gets a chance to meditate, even if a few ancient traditions are modified a bit.

“I won’t call it worship but it is our purpose,” said Rev. Miller. “The number one reason we meditate is to clear our minds and to be open, to be non-discriminating.”

Zazen, or sitting meditation, is the specialty of Miller’s group.

With Zazen, all ages and levels of dexterity can meditate with relative ease. As with Rev. Miller’s group, one has the option to meditate on a chair as opposed to a zabuton, the traditional mat used for sitting in Japan, which can be quite low to the ground.

“That includes the Roshi, or teacher,” said Rev. Miller. “I sit in a chair. When younger people come in, I offer them the opportunity to use a zabuton and zaisu, which is the cushion and mat.”

At the weekly gathering, Rev. Miller welcomes everyone from those with knowledge of the Soto Zen Buddhist tradition who have practiced Zen in the past, to beginners who simply wish to seek a more calm, fulfilling and compassionate approach to life.

Soto Zen of Florence prides itself on “not sweating the small stuff,” something it takes from Buddhist teachings.

“There is a line from one of the great sutras,” says Rev. Miller. “It basically says, ‘The way is not difficult for those that do not pick and choose.’”

Another important teaching of Soto Zen is duality.

Those who’d like to can start making those connections with others can do so at Soto Zen of Florence’s weekly meeting.

The group meets each Tuesday at 2 p.m. at FUUF, 87738 Highway 101. Those attending for the first time are encouraged to arrive at 1:30 p.m. for an orientation in this form of meditation.

A small individual donation (Dana) is requested to sustain the effort.

Water customers in Mapleton get relief

Man sentenced to 10 years for causing death of local EMT