Smith to catch for America’s Team

The former Viking's catcher will be representing the US in Australia

“There was a runner on second, and they went to steal third,” softball catcher Alexis Smith said of a summer ball game she played a few years ago.

If Smith were to go by the book, “the second basemen gets a lead almost on third base to get us to throw to the shortstop on second. And then, when we throw to second, the runner on third would score,” Smith said.

But that’s not what happened in this case.

“I was smart enough to throw to third because I knew what they were doing,” she said. “There was a runner on second, and the runner went to steal third. But I threw down to third to get her. It got past her, and then the shortstop was backing her up. The shortstop got it, and the girl was running home — and she threw it to me and I caught it.”

The runner was in a pickle, going back and forth between bases.

“We were just throwing it back and forth and she was running. And then I got it and she wasn’t stopping. So, I just put my guard up and she ran into me. And she fell, but I was still standing. Most of my teammates didn’t know what was going on, they were confused. But I knew it. I just threw to third. It takes a lot of playing to realize what people are doing, and what ways you can score runs.”

Smith has been standing tall as a catcher in a wide variety of teams throughout her career. As a catcher at Siuslaw High School, where she just graduated, she was Sky-Em League Second Team All-League honoree and was selected from among the Oregon School Activities Association’s 4A classification of all-league rosters throughout the state.

And Smith was just chosen for America’s Team, an educational program that brings various sports — from softball to volleyball — to different countries in an attempt to bridge cultural divides through sports.

“She established herself as one of the top catchers in 4A softball this year. She is a hitter that will provide a lot of pop in our lineup,” said Brittany Hendrickson, who is the head coach at Mount Hood and is coaching team Oregon for an 11-game tour in Australia next year.

“I got an email from the Mount Hood head coach, Brittany Hendrickson, and she said that there’s this team they’re forming for next summer,” Smith said. “We get to play Australia and different teams that are coming there as well. It’s awesome, I cried when I first saw it. Actually, I first thought it was a scam. I was like, ‘Okay, that can’t be right.’”

But it was right, as Hendrickson explained.

“Lexi is a top catcher in 4A and a hitter — that will provide a lot of pop in our lineup,” said Hendrickson.

Smith laughed when she thought of being picked. “I don’t know why they picked me!” she said. “I just go out and play and do what I really know what to do.”

Smith started playing softball when she was in the third grade. Her mother was looking for something fun for her doing the summer in their Pineville, Ore., home. Cook County Parks and Recreation was forming a softball team.

“She asked me if I wanted to join, and I was like, ‘I don’t know anything about that,” Smith said. “I’ve never played sports.’ I wanted to be that cheerleader type, but I thought, ‘Why not, I’ll try.’”

At first, she just liked meeting new people as teams from Madris and Redmond would come in. Smith thought it was exciting that people would travel to her small town just to play. Meeting new people was the best part of the sport.

“And it still is,” Smith said. “You still meet new people, and it’s so much fun. You make so many memories with people that you don’t even know.”

And all of the kids coming through town had a fierce love of the game.

“I love everything about it,” Smith said. “I love how intense it. I love the mindset you have to have with that game. Just everything. I love softball.”

The love of the game came easily. But becoming good at it was difficult and took years of practice. When she wasn’t playing at school, is was summer ball, and it was usually with the older kids.

“When I was 16, I was already playing with 18-year-olds,” she said. “When I started in high school, I was varsity catcher my freshman year in Bend, Ore. When I got there, they didn’t know I knew the stuff I did already. But because I played up already, I was already in that level of play. Summer ball is more intense, and more relaxed, than high school ball. So, you get to have more plays with summer ball. I knew everything that some coaches were trying to do, rather than a senior on my team.”

When she moved to Florence during her junior year, she introduced herself to Siuslaw varsity softball coach Sean O’Mara.

“He told me that he’s never had a transfer actually be good. I was like, ‘Well, I was playing for a while and I kind of know what I’m doing.’ They had just graduated their catcher the year before, so he wasn’t going to have a catcher. He told me that I’m one of the best transfers he’s had his whole career.”

Smith said that the key to being a good catcher is aggressiveness, and knowing what you’re doing at all times.

“And knowing your teammates and what they can and can’t do, and knowing you have to work with that,” she said. “If I wanted to throw down to second, I have to have trust that they’ll be there, or else the play won’t work. I have to have the most trust out of everybody.”

She paused, then laughed.

“Well, the pitcher has the most trust. But I have the second most trust.”

Smith laughs lot, which is a stark contrast to how catchers are generally viewed.

“Everybody thinks we’re mean,” she said with another laugh. “That we have to be aggressive and that we just have to fit this role that we’re mean. ‘You can’t’ steal on me, you can’t do this on me.’ I don’t care what you do, you’re there to play. I’ll do what I do, you do what you do. But the new younger catchers, they’re like, ‘Fight me, let’s do this.’ I’m like, ‘Dude, no.’ They make it so much more than it needs to be. I’m just there to have fun and they’re going for blood or something. It’s insane.”

Smith didn’t know why catchers are viewed that way, suggesting that some coaches from out of town seem to encourage it.

“Some coaches are all like, ‘If she’s in your way, just lay into her,’” Smith said. “Look, this isn’t football. If she’s in your way, just try and go around her. But if she’s legit in your way, and there’s nothing you can do about it, then yeah — run into in. But don’t try to intentionally run into her. And some girls try do that. If you do that, and the umpire sees it, that means the runner can get an extra base. So that’s why people do it, be aggressive to get that extra base. I think that’s dumb, but whatever.”

Smith said that she wants to be a role model for young girls in softball: Love the game, know the game and be nice.

“If I have children, I want to say, ‘Hey, your mom did this.’ And if I have a daughter, she’s definitely playing, and I’m definitely bragging to her about everything I’ve done,” Smith said.

And one of those experiences she wants to brag on is going to Australia. Smith is currently fundraising for the trip, which costs $7,000 in total for airfare, hotel and insurance fees.

The message she would send when she gets to Australia?

“I would tell them to keep their heart in it,” Smith said. “No matter the circumstance, the coach, the girls, just go out there and do what you do. If they get mad for something they did, just brush it off because you know what you’re supposed to do. They don’t know what’s going on through your head, so just know that your intuition is right.” 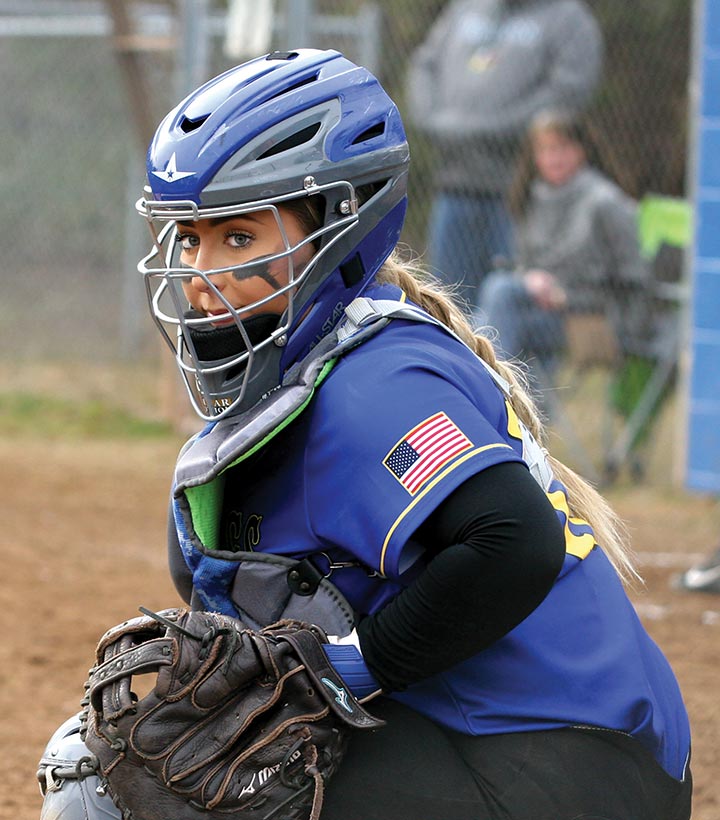