Dec. 31, 2019 — It was a win-loss evening for Siuslaw as the Vikings hosted a non-league game against the Douglas Trojans on Friday night. The boys walked away with their third victory of the season, while the girls are still searching for their first win.

On the boys’ side, the evenly matched Trojans went toe-to-toe with Siuslaw, which came out sluggish in the first quarter. The Vikings missed several shots while the Trojans managed to sink a few key baskets and keep the score close — with Siuslaw holding a narrow 12-9 lead to end the period.

It wasn’t until the second quarter that the Vikings really began to open up, taking their time on offense to set up and assure shots landed. Meanwhile, they also went man-to-man on the defensive end and began to pull away quickly in the second quarter toward a solid 32-15 halftime lead.

The Vikings’ lead continued growing throughout the second half, with the Trojans unable to adjust or recover any momentum.

In the girls’ game, the Lady Viks also got off to a slow start in their match-up, but managed to keep Douglas at bay for the first half of the opening period. The Viks and Trojans traded barbs with a 6-6 tie after 4 minutes on the clock. But Douglas began pulling away, ending the first quarter with a 16-8 lead. The Viks prevented the spread from growing too much in the second quarter, ending the first half trailing 21-12.

The second half saw the Trojans dominate the Viks, extending their lead by 15 (30-15) in the third period. Despite a short-lived rally in the fourth quarter, Siuslaw was unable to recover, losing 25 to 51.

Trojan junior guard Jazmin Lund was an unstoppable force throughout the game, putting up 15 points, followed by junior Milaneta Palumalu with 11, and sophomore Adrianna Sapp with 10.

On the Vikings’ side, Brea Blankenship and Mia Collins led scoring with 8-points each, including a pair of 3-pointers from Blankenship.

Siuslaw will again play at home on Glenn Butler Court this Friday as the teams face off against East Linn Christian Academy. The Lady Viks start the night with tipoff at 6 p.m., followed by the boys game 7:15 p.m. 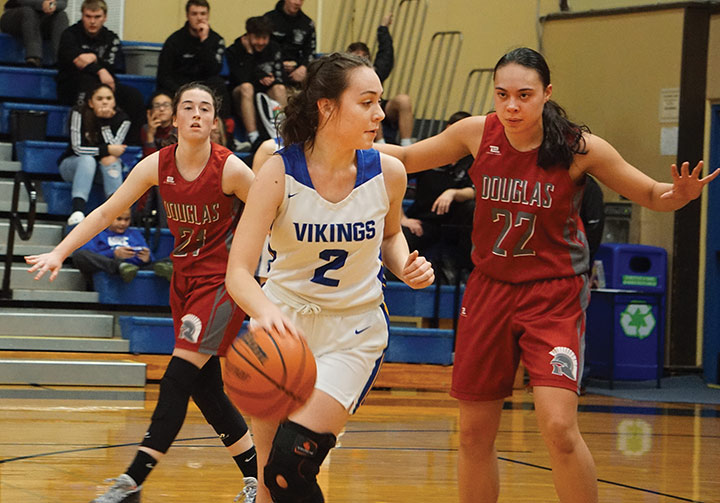 Plenty of fish in the sea