Aug. 15, 2018 — As Siuslaw wrestling coach Neil Wartnik put it, “Life is like a relay race, handing the baton from one generation to the next. To get a clean hand-off, you need examples of leadership and excellence from those who come before you.”

“The people who came before us — we stand on their shoulders,” said an emotional Chapman, who wore his father’s 1943 Siuslaw High School letterman jacket to the ceremony.

It was an evening full of reminiscing that spanned decades of Siuslaw tradition, recognizing athletes and coaches from 1964 through 1994.

Despite the span of three decades, it was clear that there was a common thread of shared experience from the generations of Siuslaw alumni who gathered to recognize some of the individuals who contributed to those the school’s legacies.

Among them was the late Dennis Howell, a legendary first-team all-state linebacker who was a member of the 1963 team that claimed the school’s first state play-off bid and went 11-1 upon reaching the state semi-finals.

Howell’s family was there to receive a plaque on his behalf, with past Florence Police Chief Lynn Lamm speaking about his life-long friend.

“I’ve been telling stories about Denny since 1961 because, to put it plainly, he was an unforgettable character who was as passionate as he was compassionate,” said Lamm. “He remains the toughest man I ever knew, and that’s after 40 years in law enforcement.”

On Oct. 29, 1973, Howell lost his life in a tragic logging accident near Thorne Bay, Alaska, while saving the lives of two co-workers.

Howell is the subject of a chapter in the upcoming book “The History of Siuslaw High School Football: A Tradition of Excellence” (Aug. 20.), written by SHS alumni Don Hunt, who introduced the next inductee, Jim Weber — who also graduated in 1964 and played on the same football team with Howell.

Hunt was only five years old when Weber was a senior, “But even at that age, I definitely had heard of Jim Weber,” said Hunt. “Even as a kid, I recognized him as a leader. And the fact that he was big enough to play quarterback and as a defensive lineman was awe-inspiring to me.”

Weber played football, basketball, baseball, wrestled and competed in track & field during career at Siuslaw. His most notable accomplishment was as the quarterback on the same team as Howell, which was the first in school history to reach the state play-offs.

“He and that football team set the standards of excellence for Siuslaw's winning tradition,” said Hunt.

Weber, who spoke from his seat at a special table with family and friends, joked that Hunt’s speech “was longer than my high school career,” which drew laughter from the room.

He then added, “I’m glad and very proud to be a part of leavng behind a legacy of expectancy.”

It was then that Wartnik stepped to the podium and spoke of the baton of legacy passed from each generation as he introduced state champion wrestler Chapman — the last state title holder in wrestling for nearly 20 years at Siuslaw.

"A lot of us looked up yo her. She made you want to be good," said Sheets."

Though Henderson’s flight was canceled, Sheets brought her to the ceremony via Facetime, holding her phone up for the audience as Henderson spoke of the uniqueness of Siuslaw athletics.

“Having other coaches and even your athletic director at your games, every game, isn’t normal,” Henderson said. “We’re lucky to have that kind of support.“

John Condie, Class of 1991, was described by Steve Galbraith as “... a man who could tear you apart on the field but hit the books just as hard off the field.”

Ironically, Condie now spends his time putting young children back together as a neuro-pediatric surgeon.

Dan Gray, a teacher at Siuslaw and past 15-year basketball coach for the Vikings, said he ranked 1994 graduate and inductee Travis Knabe at the top of his list in what a coach looks for in a basketball player.

Knabe shot 60 percent from the field, averaging 22 points and 11 rebounds per game.

“He always played with great enthusiasm and commitment,” Gray said of Knabe. “He never stopped wanting to get better. I’m so thankful I got to work with him.”

Knabe was a two-sport athlete who still holds the No. 2 spot in the high jump at Siuslaw.

The final individual inductee was long-time cheerleading coach Diane Conlee, who coached three teams to the state championship in 1991, 1992 and 1993.

She also took two teams to the Aloha Bowl, placed second at state three times and had three third-place finishes, along with two trips to national competition.

Chris Johnson, Siuslaw's athletic director and a coach in cross country and track & field for the Viks, said he recognized immediately that she was a coach to watch and learn from.

“When I arrived in 1995, I saw the discipline and dedication in her cheerleading squad and was immediately impressed with her as a coach,” Johnson said. “It will be years before anyone has the kind of impact Diane has had as a coach at Siuslaw.”

Conlee, famously humble, said she was surprised to discover she had been chosen by the committee for the Hall of Fame.

“When I opened the envelope and saw I was being inducted, it was beyond what I had imagined,” she said. “It is such an honor.”

The evening ended with the recognition of three teams of cheerleaders from 1991 through 1993, each of which won state titles in those years.

Among those honored were:

Bob Sneddon, the evening’s emcee, closed the ceremony with an observation that underscored Wartnik’s words regarding legacy and shared experience.

“There has been a common theme running throughout this evening,” said Sneddon. “We all agree that we are fortunate to be a community of people who contribute — marking the past as well as our future at Siuslaw.” 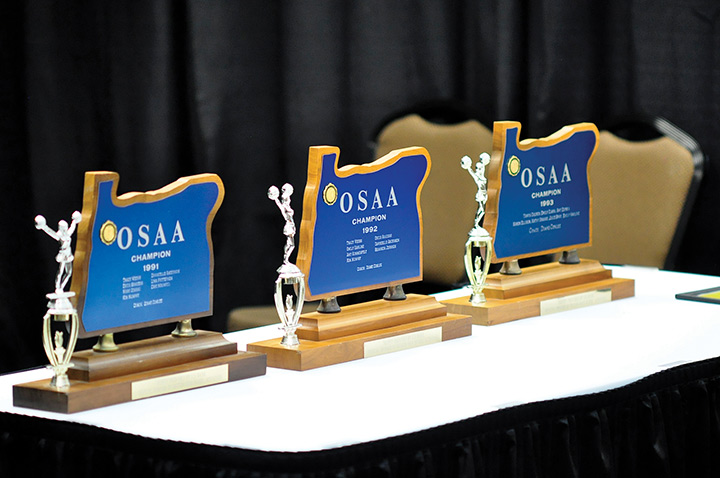 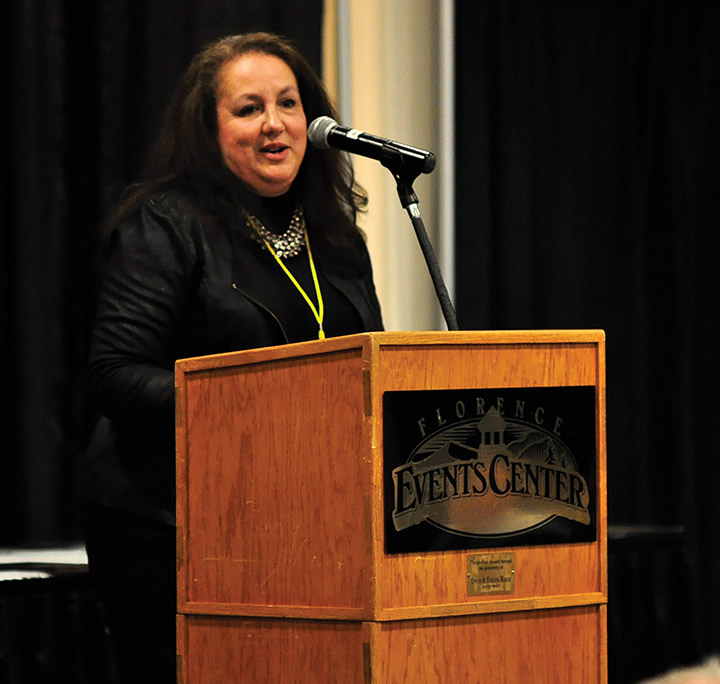 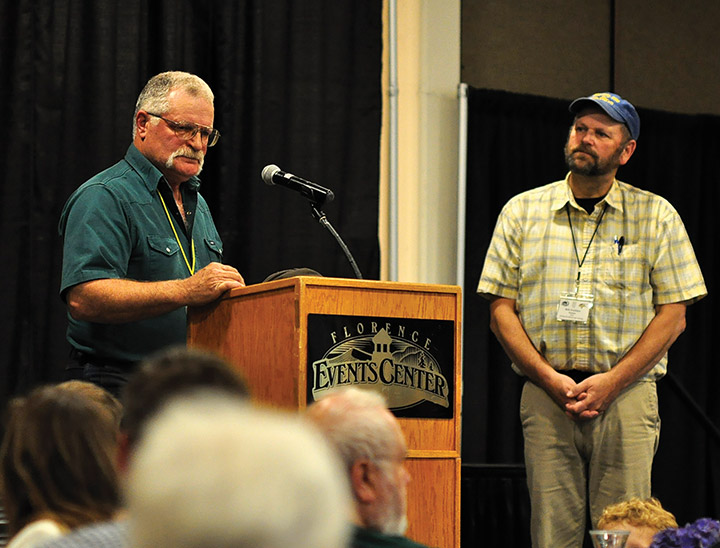