The Siuslaw wrestling team hosted the Nick Lutz Memorial tournament on Saturday, which saw 20 teams travel to Florence for the event

Jan. 22, 2020 — The Siuslaw wrestling team hosted the Nick Lutz Memorial tournament on Saturday, which saw 20 teams travel to Florence for the event. Siuslaw won the meet with 168 points, followed by Willamette and Sutherlin, which won the tournament last year.

Siuslaw dominated multiple weight divisions in the tournament, starting with Yoskar Delamora in the 106-pound division and Elijah LaCross at 145 lbs.

“They looked particularly sharp in their weight brackets,” Wartnik said.

Ryan Jennings took second place in the 152-lb. division, as did Matthew Horrillo at 285 lbs.

“They wrestled extremely well, losing their respective matches in the finals by a single point,” said Wartnik.

“Our girls champions Bailey Overton (120 lbs.) and Hayden Muller (135 lbs.) wrestled well and should not be forgotten in the backdrop of the Boys team title,” Wartnik said.

Saturday marks the first time Siuslaw won the tournament since it was christened in memoriam for Nick Lutz, a former wrestler and 2005 state champion at 189 lbs. for Siuslaw.

“Nicholas Lutz was one of the most special people I have ever worked with,” Wartnik said. “Honoring him after a tragic accident nearly 12 years ago gives this tournament a special quality. It reminds everybody to treasure life and one another. Competition is great, but people are so much more important. Sportsmanship and camaraderie should not be an afterthought.  They should be the focus of what we do.”

While Siuslaw did win the home tournament when Lutz was wrestling, “We haven’t won since his departure,” Wartnik said.

The work that goes into creating a tournament of this size takes an all-hands-on-deck approach, said Wartnik. “The Nick Lutz Memorial takes a lot of energy and a lot of organization — which is not my forte,” Wartnik said. “I have been blessed with a group of amazing friends/allies who work together to make this event special.”

He praised his assistant coaching staff for making the tournament work.

“Robert Forsythe does a great job of helping me address important organizational details.  Stecher Buss is an amazing organizer of personnel and Chris LaCosse does a great job making sure everything is done correctly.”

And of course, there’s the actual wrestlers.

“They did such a great job working together at every point in the set-up and break-down. There is a reason this group has been nominated for the 4A Wrestling Sportsmanship award again after winning it last year.”

Wartnik said the tournament prides itself on having the best hospitality room and concessions stand for coaches, officials and tournament support personnel of any tournament in the state, with Wartnik giving particular praise for this year’s coordinator, Vanessa Buss.

“She did an incredible job putting everything together,” said Wartnik. “She set up work rotations so no one would get burnt out during the course of the day.”

The volunteers that helped Buss consisted of a blend of wrestling parents, friends and several Siuslaw High School student volunteers. From scorekeeping and organizing wrestlers, to keeping a steady stream of freshly grilled burgers at the ready, the tournament was a huge effort.

On top of this, the outpouring of support from numerous parents and members of the community has been a marvel for many years — never more so than this year,” Wartnik said. “Businesses like Dominoes, A&W, and Mo’s make generous donations.”

As did many of the family members of wrestlers, who brought in casseroles and Crockpot meals to add a person touch to the hospitality room for the coaches and players.

“No one goes hungry,” Wartnik said. “Coaches and officials always rave about the care they receive here.”

“He is the best,” Wartnik said. “He runs the Oregon state tournament and 10 or 15 other tournaments each year. No one can navigate the challenges of Trackwrestling — the online wrestling tournament — program better than he can. He is able to trouble-shoot problems like no other.”

The tournament did have some glitches early in the day, particularly with the monitors that kept track of times.

“Drumm solved them quickly, and hardly anyone realized there was a significant problem,” Wartnik said. “I would not want to run such a tournament without a person of Jeff’s skill at the helm.”

Assisting Drumm at the scoring tables were a host of local volunteers who understand wrestling and know how to score matches.

“My friend Mike Smith has been running a table at the Lutz Tournament for years,” Wartnik said. “My daughters Hannah, Elizabeth and Anne have also helped run tables for more than a decade. High School students Alison Huff and Margot Fleming have worked the last three tournaments and do an amazing job. Anne, Ali and Margot are so accomplished that they were recruited last year by Drumm to run tables at the state tournament.”

Overall, Wartnik called the tournament a big success operationally as well as competitively on the mats.

“I am so proud of my wrestlers for how they performed on every level,” he said.

Siuslaw wrestling heads to Marshfield on Friday and Saturday for dual meet tournaments. As for the chances for the Vikings this weekend, Wartnik said, “We are getting better and need to keep the momentum moving forward.” 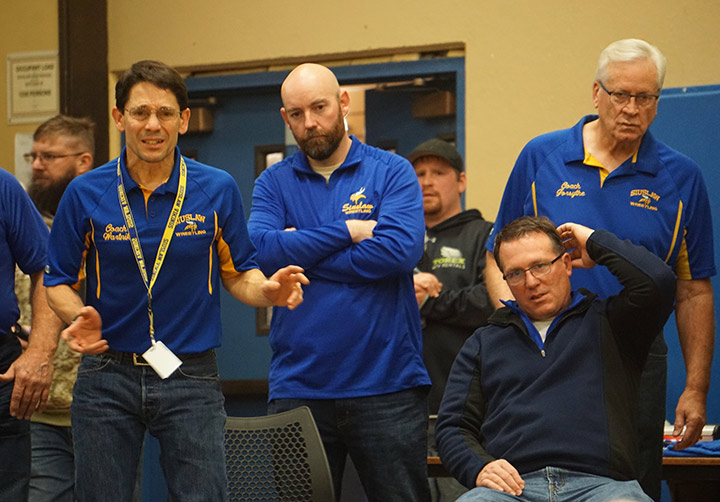