Aug. 14, 2019 — Reedsport celebrated its Centennial birthday on Saturday with a carnival, concert and free admittance to one of the coast’s most interesting educational destinations, the Umpqua Discovery Center. Reedsport was incorporated as a city on Aug. 6, 1919, just 26 years after the City of Florence was incorporated.

Emily Bradley, Coordinator of the Reedsport Main Street Program, says the fact that the city made it to this birthday is significant in and of itself.

“The Centennial Carnival and the entire year of events to commemorate 100 years of Reedsport came about because 100 years is no small feat. Since it first became a city in 1919, Reedsport has experienced monumental highs with the boom of the timber and fishing industries, but it also has experienced some lows with major floods and when those same timber and fishing industries crashed leaving the economy in disrepair. Through each of those lows, the people of Reedsport were resilient,” she said. “The city recognized the importance in celebrating the centennial because really it’s celebrating the people who make up this community.”

Reedsport is located at the mouth of the Umpqua River and lies in close proximity to the Oregon Dunes National Recreation Center. Both of these major natural attractions bring tourists, outdoor enthusiasts and residents to the small former logging and shipping town, which has a population of just under 5,000.

The economic situation in Reedsport mirrors many other towns in the area that were founded and sustained for decades by supporting the timber and fishing industries, until those sectors essentially disappeared.

However, Reedsport, Winchester Bay and other small towns situated along the boundaries of the dunes are currently enjoying a resurgence with the ever-growing popularity of different types of off-road activities.

The large numbers of families and youngsters wearing ATV branded clothing and hats at the Reedsport Centennial spoke to the importance of integrating younger generations of tourists into the region’s recreational menu.

Saturday’s celebrations began with a classic car show early in the day, with the Reedsport Fire Department at hand with a ladder truck for youngsters to explore.

“The carnival specifically was the main event because we knew the event needed to be family-friendly and inviting to the entire community,” Bradley said.

The Centennial Carnival was sponsored by Anandapure, Lower Umpqua Hospital and Fred Wahl Marine Construction, which meant the event had free admission. All the games were also free, and there was a prize every time for each child.

“We had no expectations for how many people would attend, because Reedsport has never had a carnival,” Bradley continued. “Attendance and excitement surpassed expectations and over 1,000 people were in attendance. “

One of the main draws for the celebration was free admission at The Umpqua Discovery Center. The center’s mission is to “provide users and visitors with education about the natural and cultural history of the lower Umpqua area” — and it does just that with a number of informative displays devoted to many different aspects of the region.

Umpqua Discovery Center Director Diane Novak said she was extremely pleased with the turnout for the celebration and her organization’s contribution to the success of the event.

“Reedsport’s 100th birthday … was well attended by over 500 people visiting the center with the free admission,” Novak said. “Visitors enjoyed the Natural and Cultural history exhibits, along with viewing of the newly updated ‘I Remember, I Remember’ exhibit with new Oral Histories to listen to. The new centennial bench, donated by Bill Hardy, located at the front entry of the Center, was also enjoyed by many.”

People were able to take a self-guided tour of the center, which were situated on a series of ramps showcasing dioramas that share the different types of wildlife, trees and undergrowth of the Reedsport area. There is a helpful audio component to most of the dioramas as the animals or birds or bugs that are shown in a specific display can also be heard with a simple push of a button.

The displays are colorful, well maintained and share a significant amount of information in a small space.

In addition, the walls and inclines in the discovery center are painted with long, colorful murals that depict regional themes, history and locations, adding to the overall sense of integration of the facility into the surrounding outdoor space. Many of the animals and birds that are included in the displays inside the center can be seen from these vantage points along the Umpqua River.

The center also features an interactive weather and tide display, a small replica of a Reedsport shop, artifacts donated by past residents and a new collection of oral histories available to interested listeners. An extensive collection of old photographs line many of the walls of the center and these compelling historic images can be purchased as mementos of a visit to the discovery center.

The focus on the natural world and the attention to detail at the discovery center offer a multi-sensory learning experience that is entertaining for all ages but seems particularly well suited to engage younger visitors, of which there were many on Saturday.

Outside, the center offered a wide wooden deck for viewing the Umpqua River, which flows a few hundred feet beyond the center. The deck connects to a small family-run restaurant, The Schooner.

Furthermore, the Umpqua River and surrounding waterways present a growing water-related recreational sector for Reedsport. People who have discovered the many lakes and rivers close to the ocean and the Siuslaw National Forest had tied up their kayaks and canoes along the river and walked the short distance to the carnival area.

The Reedsport Centennial Celebration literally ended on an upbeat note as the last event scheduled for the day was a free concert given by the band Stillwater, which was enjoyed by about 200 individuals.

“Reedsport has a proud past and a promising future, and it’s the people in the community that are giving the promising future to Reedsport,” Bradley said. “It’s important to celebrate the past 100 years in order to look forward to the next 100.” 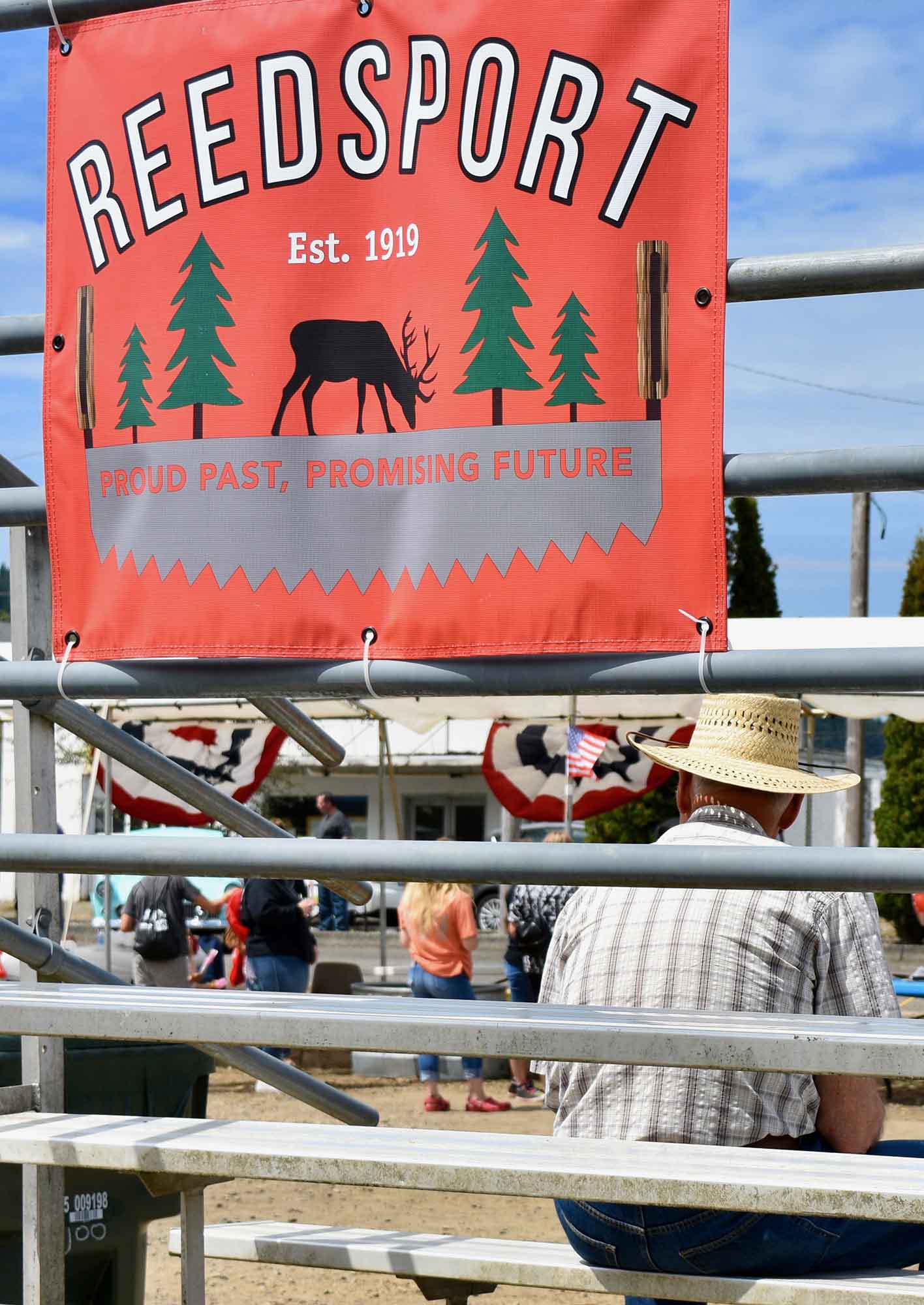 Florence Farmer’s Market ends season by filling pantries of others