Putting stream restoration in the hands of the people

Feb. 22, 2020 — The Siuslaw Watershed Council held its 21st annual Native Plant Distribution last Saturday, an event that gives over 10,000 plants each year to community members in the Siuslaw Watershed and coastal lake subbasins. This year’s program fulfilled over 115 orders that were distributed from four different distribution sites in Lorraine, Blachly, Deadwood and Mapleton. 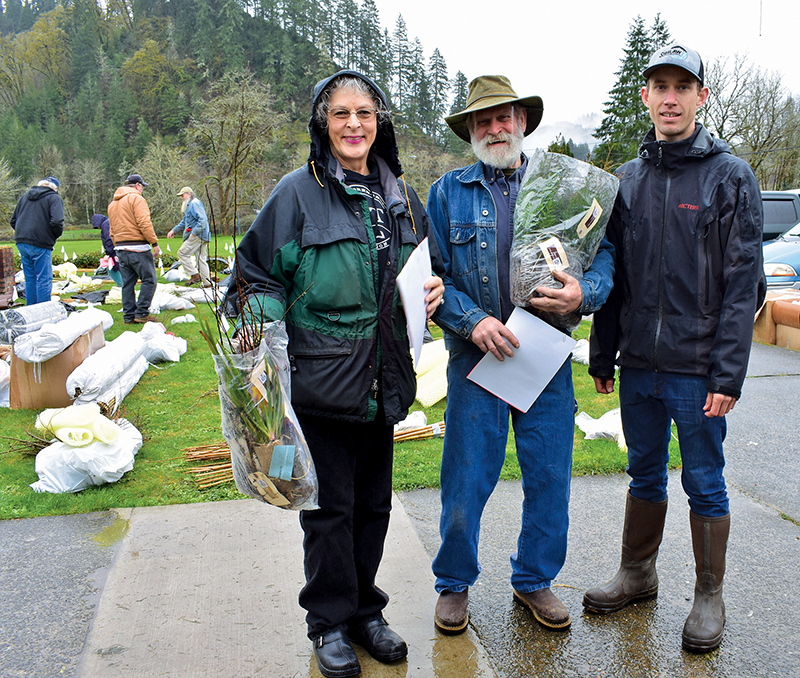 Siuslaw Watershed Program Director Kyle Terry said, “The real intent here is that the U.S. Forest Service supports this program because they have a real high emphasis on improving habitat for wildlife and water quality. We use the support and funding to leverage all the volunteers we have to improve those key ecosystem services, and habitat services like water quality.”

Terry walked through the various native plants and trees that the council was giving away, pointing to specimens as he went.

“We have coastal black gooseberry, which is good forage for birds,” he said. “They eat the berries and it offers a good habitat for birds as well. They can hide inside of these branches. Same with black twinberry. And then you have things like ocean spray and Pacific ninebark, which are excellent pollinators.”

As for the tree species, which were the origin of the program, the selection included Sitka spruce, Douglas fir, western red cedar, Oregon white oak and red alder.

“All of these can be planted on the flood plain and close to the stream to cast shade on the stream and lower water temperature,” Terry explained. “And when they fall into the stream generations later, they become really good fish habitat and improve the water quality in terms of temperature and sedimentation.”

The importance of keeping water temperatures cool in streams is to help a variety of aquatic organisms, which rely on certain temperature ranges for their life cycles, especially coho salmon. 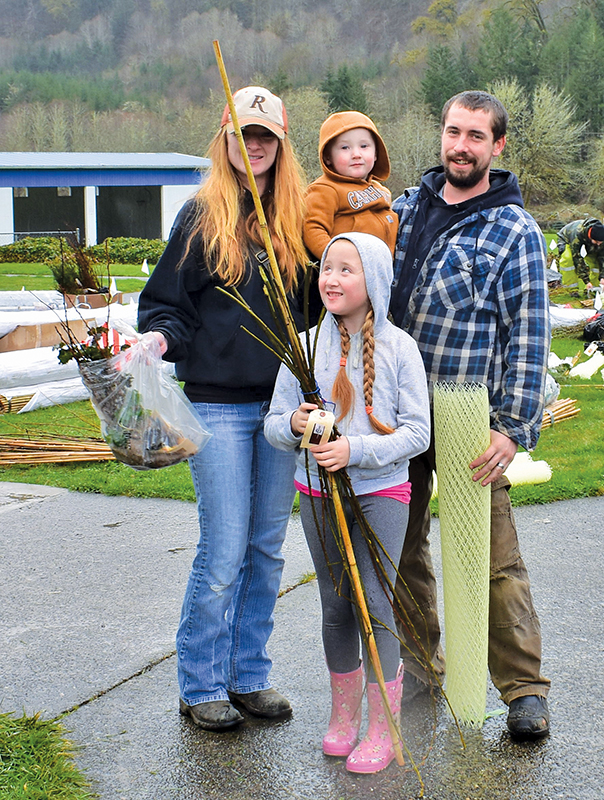 “As temperatures increase, conditions start to favor other freshwater species that are less desirable here that were introduced, like largemouth bass, which can thrive in higher temperature ranges,” Terry said. “As you see streams increase in temperature, you start to see a conversion from our natural native species to more introduced species.”

When the trees fall into the streams, they can create habitats for salmon, as well as filter pollutants in runoff.

“If you have bare stream banks, adding trees and shrubs growing along those tree banks will lower the rate of sedimentation,” Terry said.

Siuslaw Watershed Council works through grants from the Forest Service and donations from Roseburg Timber and the Bureau of Land Management, as well as smaller businesses from the community.

“River Roasters donated burlap sacks for us this year, and we got support from the Three Rivers Foundation to offer plants that were important to the local tribes,” Terry said. 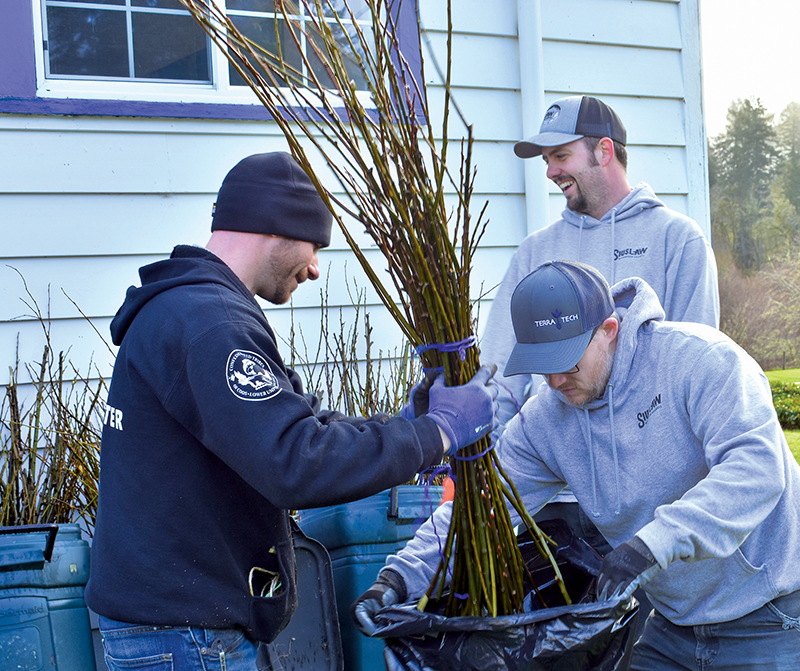 Over the course of its 22 years, Terry estimates the watershed’s program has distributed close to 100,000 trees. And with the lifecycle of trees, the watershed could spend the next 22 years giving out hundreds of thousands more.

According to Siuslaw Watershed Council Board Vice Chair Jim Grano, “If you’re creating the waterside habitat that we are, there are a number of things that will happen over time. Flooding can take out trees or damage them. Beaver can have an impact on them. Some just flat out don’t live. We’ve had a couple of droughts. All of that stuff can affect it.”

But one of the largest uses for the native plants occurs when individuals take the time to restore their own properties.

When Grano first moved to his home on the Mapleton riverbank a little over two decades ago, his property was filled with blackberry bushes. Unknowledgeable about the local ecology, he thought he could just pull up the berry bushes and enjoy a well-manicured property.

“But then underneath the blackberries was reed canary grass, which took over. And that’s a nasty guy, too,” he recalled.

Over a “long period of time,” he took out the reed canary.

The only answer to his problem was planting the native plants of the area to push out the invasive species. 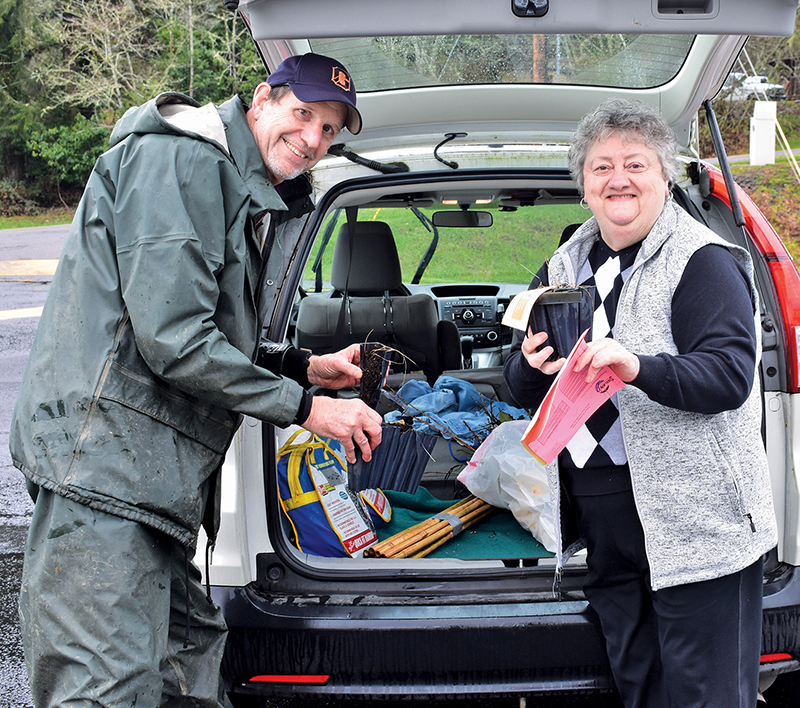 “We planted a wide variety of willows and different native plants that should be there,” Grano said. “It looks good now and I get compliments as people kayak or boat on the river, seeing how nicely diverse it is.”

Grano convinced the Mapleton Lions Club, of which he is a member, to clear out the invasive species on its property, which also hosts the Mapleton branch of the Siuslaw Public Library. The club has been gradually replanting there as well.

“And then my neighbor upriver has joined up, and we’ve increased that swath of riverbank with native plants and made it animal friendly,” he said.

The native species don’t just help regulate invasive species. While Grano was battling the blackberries in ‘96, devastating floods began to wreak havoc on the community.

“We had a real nice ramp and a big dock at our house, but the flood took it all out,” he recalled. “Then you could just see more and more erosion and the riverbank being taken away.”

But the trees he planted afterwards protected his property in the flood of 2012.

“I planted spruce, cedar and alder,” Grano said. “It was really cool seeing how planting just a few of those stopped the destruction of the bank by the debris.”

It’s a process that residents all around the upriver communities have been following, and it follows a tradition of restoration that goes back decades.

“There are multiple generation folks living here, many of which are timber fallers,” Grano said. “People think of them as mean, evil extractors ruining the land, but that’s not accurate. The timber fallers I know that were born and raised here, they have as much, or more, appreciation of the forest and the woods than many conservationists.”

As an example, Grano recounted the creation of the PAWN Old Growth Trail up the North Fork. The 10-acre area had an old growth patch of trees up to 550 years old, and the local loggers would go there to admire the beauty.

“That was two decades ago. People realized that old growth was in short supply, especially around here,” Grano said.

So the loggers met with a Forest Service ranger and a mutual decision was made to preserve the 10 acres for perpetuity.

“And so there’s a great trail there, a self-guided brochure when you go there,” Grano said. “You learn a lot when you walk the trail. That is an example of locals treasuring where they live, no matter what their particular job is. You can’t stereotype that. They’re in tune with the area.”

From the hikers who enjoy the natural beauty of the area, to the fishers who understand the direct connection between life, the stream and the shoreline, Siuslaw watershed residents have taken it upon themselves to keep the land pristine.

Taking personal responsibility for the environment is a passion for all Oregonians that also goes back decades.

“If you go back in history, in 1995, the Oregon plan for salmon restoration was an intervention to prevent federal agencies’ regulation of other people’s properties and streams,” Grano said. “We decided we’ll take care of it ourselves by making these watershed associations. We’ll have the people understand and they’ll do the restoration and conservation. You don’t have to come here and put people in jail or fine them.”

It’s a tradition that has continued from restoring the delicate balance on the coastal dunes to restoring habitats for salmon. And it’s programs like Siuslaw Watershed Council’s native plant distribution that makes it possible.

“I don’t have the financial resources to go to nurseries and buy all this stuff,” Grano said. “Not only did I receive the proper native plants, but I received the education of what to use where. I’ve personally benefited, my property has benefited, my area and the ecosystem has benefited from this program.”

For more information about the Siuslaw Watershed Council and its future events, visit siuslaw.org.