Oct. 12, 2019 — The Florence Garden Club’s October meeting focused attention on an extremely rare plant found in few places in the world. Among them is the Darlingtonia Wayside Botanical Garden, an Oregon State Park. The 18-acre park is located on Mercer Lake Road, just off Highway 101, and is the only state park dedicated to the preservation of one plant species, Darlingtonia Californica, also known as the cobra lily.

The common name was coined because of the similarities between the tongue of the cobra, which resembles the long red tendrils on the exterior of the plant, and the hooded flower at the top of the plant, which gives the impression of a snake rearing to strike.

Darlingtonia has a number of unique qualities but most interestingly might be its diet, which is carnivorous.

Oregon Parks Department Park Ranger Katie Pollut is stationed at Honeyman State Park and is very familiar with the plant. She shared some of her enthusiasm about the unusual plant with local gardeners on Wednesday.

Pollut gave an informative and fact-filled presentation to the 40 or so gardeners in attendance, which touched on the habitat preferred by one of the rarest and most visually striking members of the pitcher family.

“This is the only member of this plant family that exists west of the Rockies and this is the only place in the entire world that Darlingtonia grows in the wild,” Pollut said. “It is kind of a picky plant, as far as where it will grow. It doesn’t really care about altitude. We have it right here in Florence, at sea level, and it will grow all the way up to 8,500 feet elevation. Really what it cares about is the soil and water conditions, so you are most likely to find Darlingtonia in a bog or marshy meadow.”

This description of the preferred habitat for the cobra lily is apt as its local home has a wooden walkway that allows visitors to view thousands of the unique plants from above the soggy ground where they live.

Darlingtonia doesn’t just require plenty of water; it also needs the water to be moving, primarily to cool the plant’s root structure. There is also concern among botanists that minor variations in the climate will negatively impact the special plants.

“They like someplace that is very wet, but it can’t be just any wet place, it requires a little flowing water,” Pollut said. “It is also incredibly temperature sensitive. If the roots get over about 10 degrees Celsius (50 degrees Fahrenheit), the plant gets stressed out and it can die from overheating. It is not endangered but it does have very small populations, so any problem with the population is magnified because of those small numbers.”

Pollut added that the biggest challenge facing the rare plant is caused by humans.

“The biggest danger Darlingtonia faces is from loss of habitat. Typically, they grow in places with lots of bugs and standing water. When we start building in these places, we tend to drain things like bogs and move that water away from where we want to have our houses and buildings and roads,” Pollut said. “And we start installing things like septic systems, wells and things along those lines that pull water away from the area, endangering the plant.”

Darlingtonia is rarely observed in a dormant state and, while visually compelling throughout the fall, it is most spectacular earlier in the year. The plant tends to grow in clusters with hundreds of individuals plants grouped together to form an impressive collection of long, semi-translucent hoods with dark green or red stripes on the outer leaves. The physical make-up of the plant is considered critical to the attraction and trapping of food by the carnivorous plant.

“Darlingtonia flowers in the late spring and early summer. They are a beautiful deep red color and they do flower upside down, which is thought to help protect the plant’s pollen. Rain is not good for pollen, so this is an important protection method for the plant,” Pollut said. “The fish tail leaves kind of act like as a lure. It is actually a part of the flower that produces nectar, just like the flower does. It’s there to try and attract flies or bees or whatever is flying around, because it doesn’t really care what it eats.”

Because of the way that Darlingtonia attracts food, it has little control of what is caught in the pitcher that contains the chemicals that breakdown the flesh of the bugs caught, allowing the exoskeleton of the creature to sink to the bottom of the pitcher and eventually be absorbed into the plant’s flesh.

One of the mysteries that Pollut is hoping to solve, along with many others, is the manner in which Darlingtonia propagates. There have been numerous studies done to attempt to determine which pollinators are involved in propagating the plant and to this point there has been no definitive answer to the question.

The Darlingtonia State Natural Site is located at 5400 Mercer Lake Road and is open to the public 24 hours a day. There is no fee required at the site. 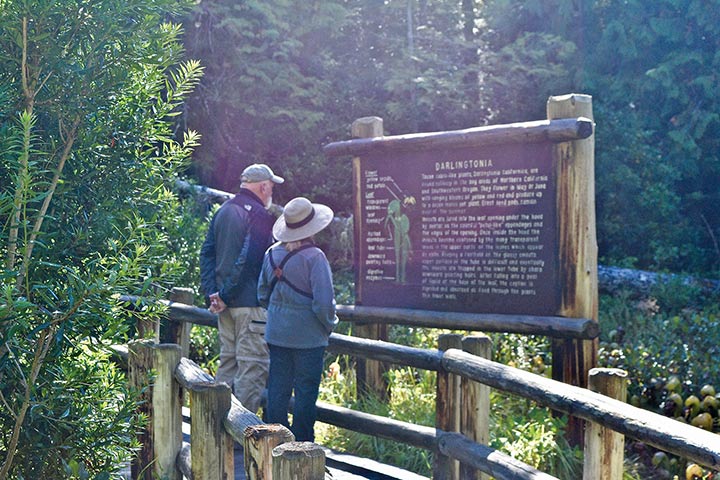 Florence phases in to ‘new normal

Florence Council does housekeeping, looks to next phases