June 1, 2019 — After a 13-year hiatus, Siuslaw students experienced an overnight Outdoor School this week at Camp Cleawox. Thanks to Outdoor School Director McKenzie Perry and a team of leaders, teen councilors and eighth-grade helpers, more than 100 sixth-grade students spent Tuesday to Friday at the camp.

Perry, whom the students called “Chickadee” during the camp, remembers her own Outdoor School adventures when she was a student at Siuslaw.

“I did Stream Team when I was at the middle school, and my grade was one of the last groups to do the overnight Outdoor School,” she said.

She said that Siuslaw ended its previous overnight Outdoor School in 2006 after a couple years on and off. It was eventually replaced by the Outdoor Adventure Camp for fifth- and seventh-graders at Camp Baker, a local Boy Scout Camp.

“When Oregon passed a bill to fund Outdoor School, it funded only fifth- and sixth-grades, and prior to that, we had been doing Outdoor Adventure Camp, which was daytime. That was fifth- and seventh-grades, so the budgeting was sort of a nightmare. We could pay for like half of it with grant funds, but not use those to pay for the other half,” she said.

When it became apparent that Siuslaw could hold Outdoor School this year, Perry, a sixth-grade science teacher, decided to direct.

“Our sixth-grade team is super awesome, so they said we could do it in sixth-grade instead of the five/seven split,” she said. “And I dig it, since I teach Stream Team and it sort of goes along with a lot of the things we already do. It’s a good opener to middle school, too.”

She said she “had to reinvent the wheel” since a lot of the old data was on floppy disks. And not everything could carry over from the Outdoor Adventure Camp, especially since Outdoor School extends into the night.

This year’s camp was held at Girl Scouts of Oregon and Southwest Washington’s Camp Cleawox, which is celebrating its 90th birthday this year. The forested camp features gravel paths, lake access, a ropes course, archery range, and more than a dozen sperate areas for camp activities. A big highlight is evening s’mores and the chance to stay overnight in the cabins scattered throughout the property.

“It feels really big, especially when we’re doing rounds at 11 o’clock at night,” Perry said. She added that 87 students stayed the night. “We didn’t have any kids go home homesick the first night, which was nice.”

Some students only stayed for day activities, going home at the end of the school day. Still others stayed through evening activities but went home for the night.

One overnight adult chaperone monitored groups of four cabins, which were each overseen by one high school counselor. Campers could win tickets for clean cabins. Some cabins had even decorated outside.

“The winning cabin group that has the most tickets is going to get special s’mores materials Thursday night,” Perry said.

She added that the boy cabins “were not quite as beautiful as the girls’ but still pretty clean.” Everyone wanted a chance to win extra ingredients for the campfire treats.

To keep everyone organized, every Outdoor School participant wore a “wood cookie” with their name engraved on it. These wood rounds attached to necklaces served as name tags and reminders of camp counselors’ camp names. If a camper lost the wood cookie or forgot someone’s camp name, they had to join in a punishment called the “Squirrely Dance.”

One eighth-grade cub counselor, called “Lupin” for the week, described one of the campers’ favorite activities — Gaga Ball.

“Right there in the gladiator ring is Gaga Ball. It’s kind of crazy,” she said. “Everyone is on the side of the ring and the ball is in the middle. One kid screams ‘Gaga Ball!’ and everyone goes running towards it. You can’t pick up the ball, and you can’t kick it, so you have to slap it towards people. You have to try to hit them knee or below, and if you get hit by it, you’re out. It’s pretty intense and everyone loves it.”

Other cub counselors Sparrow and Yogi joined her to talk about their experiences.

“We’ve been as kids when it was just a day camp before,” Lupin said. “I love the outdoors, and honestly I’m glad to get a break from the classroom and be outside.”

Sparrow said the middle schoolers had to apply, just like the high school counselors. Five eighth-graders were selected.

“The cubs help,” Lupin said. “We run errands. Yesterday, we were lugging firewood everywhere. As cubs, we’re just training, getting the ropes for how everything works. Hopefully next year, we can become a day-time counselor.”

The cubs’ main area of authority was helping during rec time, which Sparrow said was her favorite.

Yogi said, “Probably the most interesting part for me is the archery, since I love bows. I’ve just grown up them and around hunting.”

Over at the archery range, two adult supervisors worked with students on proper shooting technique.

“You guys having fun?” Perry asked campers who were waiting their turns.

“Yeah, but like it’s kind of hard,” one girl answered. “Some bows you have to aim above or below the target.”

“Yeah, that’s why I like the orange one,” a boy added.

Camper Max walked by holding a pink bow, saying that it was the best.

“And Max got a full-out bullseye!” the boy said as Max went up to the line to take aim.

According to Perry, high school counselors help with each of the 14 learning stations. They are partnered with experts on the topic, such as Cape Perpetua rangers, Camp Cleawox staff, Salmon and Trout Enrichment Program volunteers, Siuslaw Watershed Council’s Program Manager Kyle Terry, Western Lane Ambulance District EMTs and more.

“The counselors are there sort of as kid movers and kid helpers,” Perry said.

Charlie York, a critical care paramedic with Western Lane, said, “Since there aren’t too many adult chaperones, the high school kids have volunteered to be counselors, and … they have done very, very well as far as attitudes.”

York and Safety Officer Dave Haberman led students in creating slings, splints and bandages during the hour-long emergency care study section. The ambulance crew was also on staff during the day in case emergency situations arose.

“What we’re teaching is first-aid basics,” York said. “We also teach campers how to use an epinephrine pen in case someone has to use it, as well as bleeding control. The kids really seem to be receptive. There are a lot more fun things out here, like archery, fishing and kayaking — but the kids come to here and they get to become really engaged. Next thing you know, the hour is burned up and they get to go on to their next station.”

Other activity stations included canoeing with a certified lifeguard, water quality testing to look at bugs and test the pH of the lake water, hiking with rangers from Cape Perpetua, playing adventure games like Gaga Ball, climbing through a low ropes course, making tie dye, painting gifts of kindness and fishing.

According to STEP member Ron Caputo, campers caught over 70 trout in three days.

“And they ate them for dinner tonight (Thursday) after cooking themselves over the campfire and they were delicious!” Perry said in a Facebook post. “Thank you STEP!”

One lesson included orienteering and compass work. Perry navigated the paths on the way there.

“The counselor we’re coming upon, ‘Queen Bee,’ is Madison Reynolds, the Rhody Queen. She also has been a TA (teacher’s assistant) in my science class for the last two years, so I was so stoked to be able to get her out here,” Perry said. “She has been an amazing counselor since she knows all the kids and basically a sixth-grade teacher at this point.”

“Jamie (Gorder) has been out here all week, which has been amazing,” Perry said. “She’s been our legitimate camp cook. Rotary has volunteered to send four to five people every meal to cook — we’ve got a lot of people working for that. But Jamie has really been running the kitchen. Having that continuity between when they all leave and come back in has been great. Next year we might actually have to hire a camp cook, or maybe hire Jamie.”

Jamie said she was excited to spend the week with Silas, her son, and have her husband come help during meal times.

“I know I’m very overprotective of my kid, so I said, ‘I’ll just take a week vacation and spend the week out here, whatever you guys need help with.’ Well, I’m out here and I get a text saying they needed help in the kitchen. So I’ve literally been doing every meal. Which is completely fine because Silas loves it, since I’m not following him with a camera,” she said.

Perry thanked all the kitchen helpers.

“Kids say the food has been like the best thing ever,” she said. “‘This is so much better than school food’ — which is really funny, because we ordered it through the school so it really is still school food.”

Each day featured three meals, snacks and dessert, all to give energy to the students spending their days full of outdoor fun.

Some activities were harder than others, especially when wind carried canoers off course.

“Only a few kids ended up in the drink,” the lifeguard joked. Everyone who entered the boats had to wear a life jacket and follow safety procedures.

“I kind of don’t want to,” he said, showing his exhaustion. “I think I’ll just sit down.”

Before long, he ran off to go play Gaga Ball.

At the end of the week, students were bused back to Siuslaw Middle School on Friday morning.

“It’s been such an amazing camp,” Gorder said.

Perry added, “We’re lucky that we can do this so close to home.” 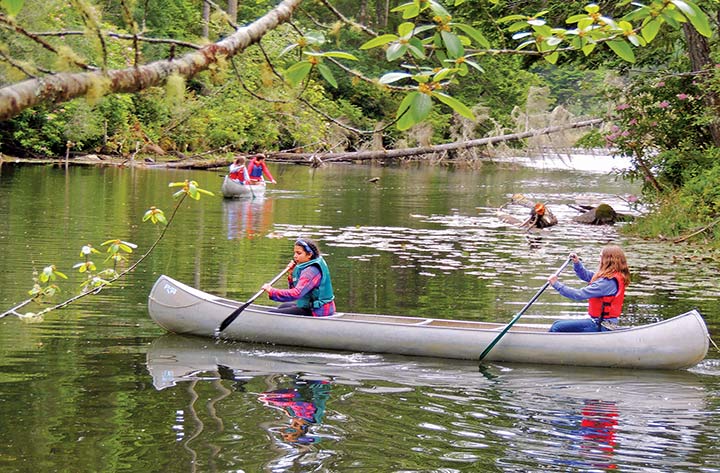 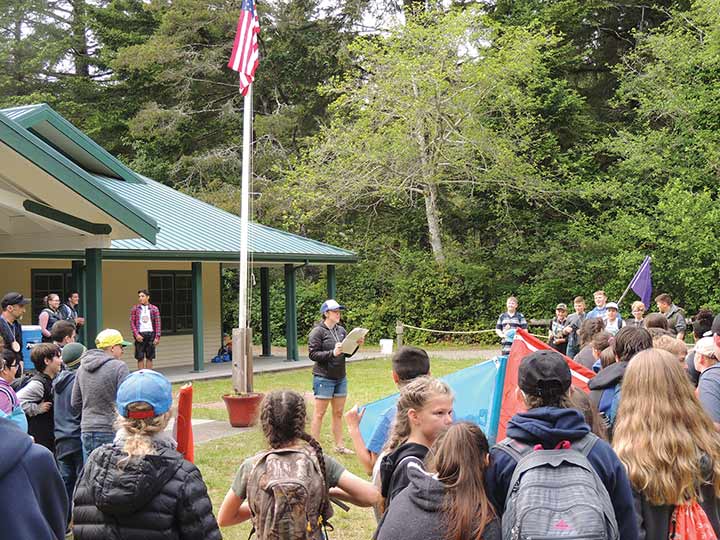 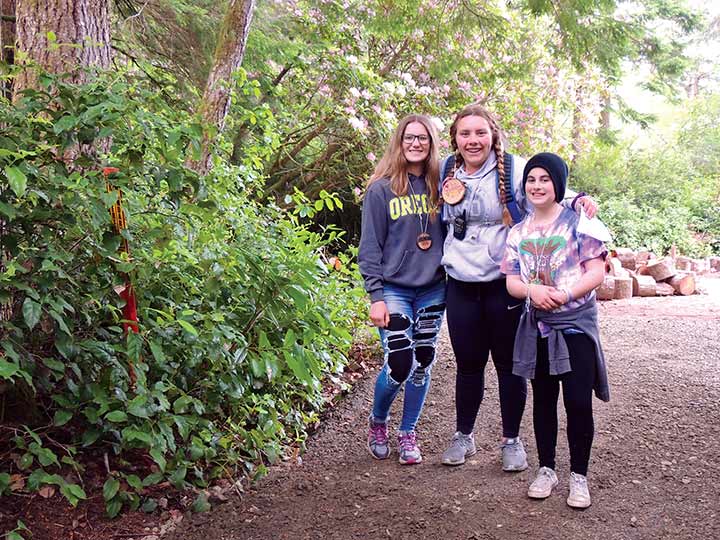 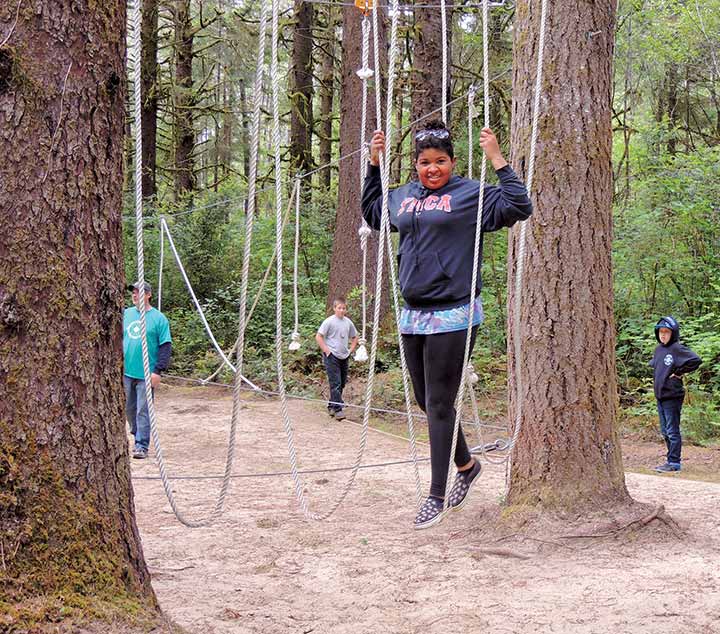 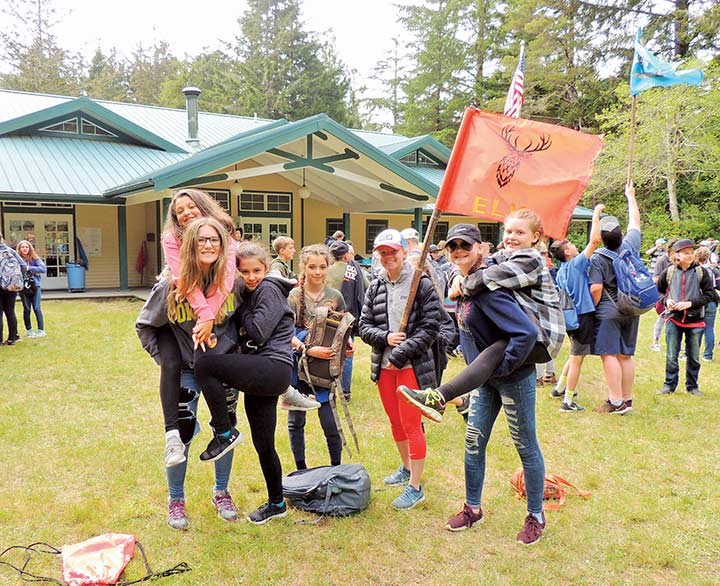