Senior class members of both basketball teams, as well as band and the cheerleading squad, each had a moment of recognition as they took to the hardwood, tuned their instruments or raised their pom-poms for the last time at Glenn Butler Court.

However, the evening was also the final appearance of one individual whose presence and influence within Siuslaw’s athletics programs has spanned more than three decades. For many in the stands, Vikings cheerleading coach Diane Conlee has been the silent but constant embodiment of Siuslaw spirit for their entire lives — in some cases, in the lives of their children as well.

For someone whose beginnings with the program occurred by mere happenstance back in the mid 1980s, Conlee’s dedication as a coach and mentor has become legendary and, in the words of SHS athletic director Chris Johnson, a prime example of coaching at its best.

“When I arrived in 1995, I saw the discipline and dedication in her cheerleading squad and was immediately impressed with her as a coach,” Johnson said of Conlee during her induction into the Siuslaw Hall of Fame last year. “I recognized immediately that she was a coach to watch and learn from.”

Over the years, her squads placed second at state three times, had three third-place finishes at state and made two trips to national competition.

“I didn’t have a background in cheer but did have some dance and choreography experience from my years as a baton twirler,” said Conlee, who said her initial goal was a simple one.

“I just wanted to survive,” she said. “I wanted to make changes quickly in an effort to help the cheerleaders be better crowd leaders, support the teams they cheered for and promote spirit and sportsmanship — and not all of those changes were popular at first.”

Conlee said she stumbled through that first season as head coach, looking for as much help and support as she could get.

“As with all new coaches, the learning curve was high because you’re not only learning about the sport you are coaching, but also how to work with the administration, squad members and their families.”

Ironically, for someone whose primary focus is having presence and directing crowds to cheer and chant, Conlee is known for her humbleness and quietly shy nature.

During her acceptance at last year’s induction ceremony, during which all three of her state championship teams were also inducted, Conlee described being a part of the school’s hall of fame as “beyond what I had imagined possible.”

Even now, she described the experience as a blessing.

“It’s a memory I will not ever forget, because who would have thought all those years ago that it would be an honor given to a cheerleading coach?” she said. “I thank Chris Johnson and the Hall of Fame committee for seeing something in me that made me worthy of that honor.”

Conlee said her goals leading into her final season were essentially the same as those she set for herself and her team some 30 years ago, explaining her belief is that cheerleaders play a big part in promoting school spirit, hospitality for visiting teams and examples of sportsmanship at all events — and even off the court and sidelines.

“Cheerleaders represent Siuslaw High School in and out of uniform at games, assemblies, community service events, and as role models while interacting with students at the elementary school,” Conlee said.

Among the challenges Conlee has faced and often embraced as a cheerleading coach has been the evolving nature of the sport itself, which has transitioned from simply organizing crowd cheers at games to adopting intricate choreography, dance and tumbling. This has created more opportunity for competition, including the recently added Game Day competitions in Oregon, during which teams compete in many of the areas cheer squads perform at games throughout the season.

“This year, we not only competed at state competition with a two-and-a-half-minute routine, but also at several game Day competitions with our Fight Song, Band Dance and Crowd Leading materials as well,” said Conlee, whose team placed ninth at state last week.

Given her success over the years, Conlee said it’s really about recognizing each team for what it has to offer.

“Every team is different with different talents, skills and personalities and work ethic,” Conlee said. “What we achieve is directly related to the goals each team sets. I feel like it has been my job to provide them with the opportunity, material, support and time.

“But ultimately, they are the ones who make it happen.”

For that reason, Conlee said she sees the opportunity to coach cheerleading as more than just teaching performance fundamentals related to competition; it is also about character building for future success.

“I truly believe that cheerleading, like all sports, gives athletes a chance to gain self-confidence, leadership skills, re-sponsibility and how to work together with others to accomplish goals,” said Conlee. “Many of the cheerleaders I’ve coached have gone on to work in professions that teach and help others in schools and communities.

“It makes me smile to hear about what they have done, and how cheerleading has played a part in their lives.”

Her advice for the next coach?

“Keep smiling and enjoy the ride, because it will be full of emotions, failures, successes and some really great young people,” said Conlee. “I hope cheerleading will continue to keep the traditions alive at Siuslaw High school and be an ever-present part of representing the best our students have to offer in our community and beyond.” 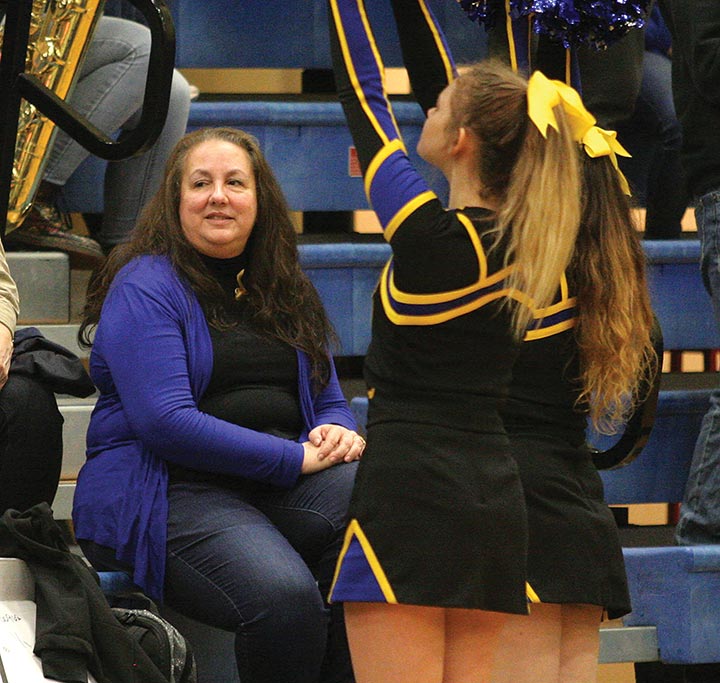