(Editor’s Note: This is the final part of a series looking at trends surrounding millennials and their needs as they decide to stay in, come to or leave the Siuslaw region. Click on Part I and Part II to read the rest of the series.)

Dan Lokic is looking for friends.

The 25-year-old, who was recently hired as the City of Florence’s management analyst, moved to the area six weeks ago and is looking for someone his own age to hang out with. He’s not having much luck.

“It’s definitely challenging to meet young people here,” he said. “I haven’t found the avenue which I should take to meet young folk. I don’t know where they are or what they do.”

That’s not to say he hasn’t tried. Like many other millennials coming from larger cities, Lokic looked to Old Town Florence for life after work. However, he ran into a snag.

“They close early,” he said.

Lokic, who has a degree in regional planning, thinks Florence has done a great job in creating a livable, walkable downtown.

“Young people want to stay out a little later and it’s a challenge for people who want to go out on a Friday night if everything closes at 10 o’clock,” he said. “What can you do? You have to stay at home.”

Lokic’s predicament is one faced by many millennials here, and it goes beyond just a Friday night outing. From difficulties in meeting other people their own age to dating, the Siuslaw region can sometimes be a formidable place for younger generations.

If the region were simply looking to remain a “retirement community,” these difficulties could be written off. In fact, Lokic was prepared for this when he moved here.

“I don’t have a core group of friends yet, but it’s something that I expected. I think it’s a good opportunity for personal development when you have to have your own fun and figure things out,” he said.

For Lokic, the issue begins with coffee.

“Back in Eugene, I loved coffee shops. I loved going to work there or to just hang out. In the afternoon, after 5 or 6 p.m., I’d go in have a tea or something. I’d love to do that here, but when I get out of work, I haven’t found any coffee shops that are open. A place that I can sit and relax with Wi-Fi. So, I just go home and make a cup of tea to hang out there,” he said.

Lokic points out that this has been the only issue he’s had with Florence — he loves the community — but the lack of available gathering places can be isolating.

“I think one of the barriers in meeting people is the fact that, after work, there isn’t much opportunity to really meet anyone. Unless I go to a restaurant or a bar, there aren’t any other places where I could meet anybody. I could just go to the gym and meet people there, but it’s weird to make friends at a gym,” he said. “I think it’s that lack of a space where there’s a chance that a young person will walk in that’s an issue.”

Geraldine Lucio, 30, didn’t know where to find people her own age when she moved to Florence three years ago, either. In fact, she still doesn’t. When asked how many millennials were in Florence, she said, “I don’t know, 20 or 30?”

That’s not to say Lucio doesn’t have friends. As owner of the Old Town Barbershop, she has plenty of people coming through her doors, and she volunteers with multiple organizations like the Elks.

“But I feel all my friends are older than 50,” she said. “I do have a little group of who are in their mid-20s to early 30s, but I mainly hang out with older people.”

It’s not that Lucio or Lokic are averse to befriending different generations.

“I feel Florence is different and unique because all the cool older people migrated here,” Lucio said. “I guess it’s kind of weird, but I like it. It’s not like I went looking for 70-year-old friends, it’s just how it happened. My oldest friend is 97. No prejudice towards the ages.”

But Lucio understands how a new person coming into town can have difficulty finding people, particularly if they’re under 50.

When asked to give advice to Lokic, Lucio said, “Go sit at the bar and make friends? I don’t know. What else is there to do? There’s not really much. You have to find friends.” 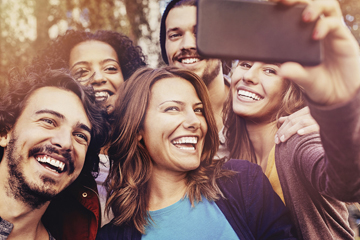 Many millennials count friend groups as a reason to stay in a community. In the Siuslaw region, finding friends can be difficult as many establishments close at the end of the 9-5 work day. (open source photo)

Lokic isn’t desperate. He knows that once he gets involved with the community through volunteer opportunities and connections through work, he’ll find people. As for now, he finds himself going to Eugene to hang out with college friends on some weekends.

But that outlook may change, particularly when it comes to dating.

“I’m sure the younger people in my age group I’ve already met already have a significant other or are married,” he said. “So, I think that’s a challenge. I don’t know, it’d be nice to find someone here. I’ll keep my eyes open.”

Statistically, millennials are putting off marriage at historic rates. According to a 2014 Pew Research Center study, only 26 percent of millennials aged 19 to 32 are married. For the boomer generation, it was 48 percent.

Brynne Sapp, a 27-year-old who grew up in Florence, married when she was 19, but has since divorced.

“I’m so glad I’m not there, because even when I was married it wasn’t the life that I wanted,” she said. “Maybe it’s all the options we have. Maybe it’s having the world in our pocket at all times and being able to see what everybody else is doing and seeing all the possibilities. All the endless possibilities. I just don’t want to be tied down.”

Of the millennials interviewed for this article, only one was married.

One Florence 20-something, who preferred to remain anonymous, grew up in Florence and isn’t having much luck when it comes to finding a suitable partner.

“Usually my relationships start from long friends,” he said. “Options are limited, so you get what you can get. Romance is a tough thing in Florence. Not just the number of people, but also limited interests and diversity. For instance, women who care about ATVing might not be your type.”

So, he ends up going to Eugene to find people.

“I’ve totally given up on Florence, to be honest,” he said. “If your article is titled ‘How to Date in Florence,’ change it to ‘Don’t Do It.’”

He does admit that the majority of people he’s tried to date are people he grew up with. His outlook could change if he were to find transplants from other states or cities; he would be more amenable to staying, but like Lokic, he has no idea where to find them.

“For me, dating is the top reason to leave,” he said.

Even if local millennials were able to find people , where to go on that first date is another hurdle to conquer.

While Lucio spends the majority of her leisure time outdoors, she did find some aspects of the town lacking, particularly compared to her previous city of Austin, Texas.

“There was live music everywhere. I miss the fresh water swimming holes there and outdoor volleyball,” she said.

It’s the live music she missed the most, a sentiment shared by almost all millennials interviewed for this series.

Lucio brought up the Florence Events Center (FEC) as an example. She does attend some of the shows, and made it a point to say she fully supported the venue, “But it’s hard for me to go to the events center because some of it is stale to me,” she said.

Lucio attempted to offset this by lending her barbershop out to local acts that couldn’t be found at the FEC, like a drag show by local performer Fanny Rugburn and a concert by local band Speakerwave.

The purpose was to have an open floor venue where people could mingle and dance.

While many of her shows were well attended, they took Lucio a lot of work to set up. Between her business and her volunteerism, she had to give up on the idea for the time being.

It’s not the first time a small business attempted to create an open floor dance hall in Florence.

And the bands, Lindsey said, were hungry to come out to the coast.

“They would offer to play very cheap because they wanted the ‘coast’ audience. College crowds were an easy market, but bands like Petunia and the Vipers recognized the value of increasing their audience, so they gave me a steal of a price,” Lindsey said.

Audiences from Portland were attending her shows, but she eventually had to close down after a couple of bands flopped.

“I was scraping by with a couple of bands, and when the music wasn’t very good that set me back,”she said.

There are places in Florence that do offer this kind of entertainment. Traveler’s Cove has live local bands weekly, and it’s a favored place for Lucio to go dancing on the weekend, but the dancing area is extremely limited.

What’s ultimately missing from these experiences is variety. Like other age groups, millennials like concerts, dancing, arcades and a whole host of other activities.

Without those, most millennials interviewed either opt for taking their money to a bigger city or hang out at home with a small group of friends.

“I seriously believe somebody could make this happen in town,” Lindsey said about her try at a nightclub. “Younger people were showing up and they were getting dressed up like it was a fun night out. I think if the young people had a place to go, and if they really knew about it, they would come out in crowds.”

The questions becomes, who is going to start it?

“We have to start it,” Lucio said. “Or you organize it. Or you round up people for a meetup. I don’t know why that is. It’s weird. It’s just how this town is. You have to make the most of it.”

Lucio was invited to be on the Seacoast Entertainment Association (SEA) board, which helps bring live entertainment to schools, libraries, residential facilities and the FEC.

“The majority of people on the board are probably older than 50,” she said. “But I was on a ‘no’ binge because I was doing too much.”

While she was too overwhelmed to take part SEA, she believed that millennials should be more involved in making decisions in the community’s future.

“Put younger people in charge of things here. I feel like the older community wants to keep it the way it was, and they don’t really like seeing change sometimes,” she said.

All who were interviewed felt that the current infrastructure in the area can support a full life for millennials, but business owners, employers, city officials and the millennials themselves have to organize and step up.

“It’s not happening unless you do it,” Lucio said.

Note: This is part 3 of a 3 part series. Find additional installments in the Special Series Archive, located here.

The right of the people to keep and bear arms: Part III