It was the history class that broke the camel’s back.

“I despised history,” Leona May Walton said as she celebrated her 92nd birthday.

“Why do we have to learn all about this stuff way, way back?” she asked

That’s partly why Walton didn’t graduate from high school in 1944. It just so happens she was also too busy making history to finish up that last course.

It was a warm and sunny day  on the riverbank in Mapleton Saturday. Walton was celebrating a family reunion with her children, her grandchildren and her great-grandchildren. Several members of the family have birthdays in August — Walton was born on Aug. 25, 1925 — so they celebrate everyone in one fell swoop.

This party was different, however, with a special surprise for Walton: A high school diploma.

It was all planned by Connie Walton, Leona’s daughter-in-law. Knowing that Leona had never graduated, she went to Mapleton High School and asked them to issue a diploma. Instead of history, her last credit would be “life experience of history.” 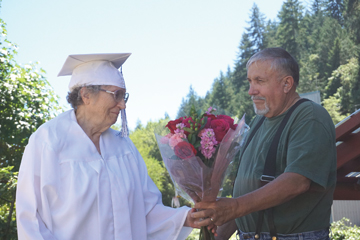 Leona May Walton and her son, Greg

Connie started the graduation ceremony speaking about her mother-in-law.

When Leona was a freshman in high school, she fell in love with Dwight Walton.

They met when she was a volleyball player; he would follow her around, heckling her as she played.

Of course they fell in love.

He often took her on motorcycle rides to the beach.

“She was a riding hot mama,” Connie said.

But then World War II hit.

Dwight served on a ship, but it was torpedoed. On leave, he came back to Swisshome and Leona never left his side. Marriage was inevitable, then they went down to San Diego where they had their first child.

It’s there she became a Rosie the Riveter.

Leona worked putting rivets on B-24’s. She was a bucker, holding metal to the planes as her partner riveted the metal to the aircraft’s fuselage.

“That gun on the other side, it just shook me. I had to hold it tight to make sure it didn’t slip,” she said.

The vibrations of the gun were jarring, leaving her body vibrating for hours afterwards.

“But it kept everything working,” she said.

After the war, Leona came back to Mapleton and looked into finishing school.

“I went to the school and I talked to the superintendent,” she recalled. “He said you have to go every day and take a whole year’s course. I only had half a credit left, and I despised history. So I said no.”

It wasn’t just the history that made Leona hesitant. She was already a mother at that point, an adult who helped the war effort.

Instead, she worked as a veterinary technician for 25 years, a job she thoroughly enjoyed.

“We had really gone to the dogs,” she joked.

Leona doesn’t think much about her role in history. She spends most of her time with her cat and shooting off guns in her backyard.

It’s to scare off the pigeons, she says, but she wouldn’t mind hitting one for dinner.

She’s still not a fan of history very much.

“You get tired of all the nonsense going on,” she said.

When asked what she would do for her graduation night, Leona said, “I’m going to stay home with my cat.”

Unveiling new amenities on the boardwalk