July 17, 2019 — Florence First United Methodist Church participated in the worldwide event “Lights for Liberty,” during which thousands of people across the globe organized vigils within their communities on the night of July 12 to bring attention to — and protest the conditions of — migrants being held in detention camps across the U.S. The Florence ORganizes (FOR) group helped put together the event for the community, with the goal of raising awareness of the conditions inside immigrant detention centers.

Right now, when an individual crosses the border into the U.S., whether they crossed legally to seek asylum or crossed illegally, they are held in immigrant detention centers or privately-run prisons while awaiting further action. Tens of thousands of immigrants are being held across the United States currently.

Florence Lights for Liberty organizer Nora Kent said, “I think it’s important to continue to shed a light on what’s happening to these people at our borders and in our private prisons so that we do not allow the government to dehumanize them and make it seem like it’s okay.”

Recent reports on conditions faced by detainees include a lack of running water, frozen food, unsanitary conditions and outbreaks of flu, lice and chicken pox with no effort to keep the sick separated from the healthy, as well as hazardous overcrowding and children are sleeping on concrete floors after being separated from their parents. In addition, many are being held in detention centers longer than legal guidelines allow. In the worst cases, a recent analysis of federal data has documented 24 immigrant deaths while in Immigration and Customs Enforcement (ICE) custody over the past two years.

In Florence, approximately 30 individuals attended Friday’s vigil, which began with statements about the conditions at the detention camps, as well as concerns over the behavior of border patrol agents themselves.

Recently, the nonprofit newsroom ProPublica reported the existence of a three-year-old Facebook group for current and former Border Patrol agents, with about 9,500 members. Among the posts being shared were jokes made about the deaths of migrants, vulgar memes of democratic representatives and racist jokes aimed at Latino members of Congress who visited Southwest Texas detention centers earlier this month.

“If we could look at each other and see what is holy in the other, we wouldn’t be in this situation. We can oppose without hate,” said Pastor Greg Wood, of the Presbyterian Church of the Siuslaw, while leading the vigil attendees in a prayer.

The vigil also included the Florence Methodist church’s new pastor, Karen Love Baisinger, who showed her appreciation for everyone attending the vigil as well as the importance of bringing awareness to the situation in the detention centers.

“For those who are suffering, those being traumatized, I am so grateful we are here to stand in solidarity for these injustices, to say ‘this is not who we are or who we want to be,’” Baisinger said.

Oregon Sen. Ron Widen was joined by fellow Oregon Sen. Jeff Merkley, New York Sen. Charles E. Schumer and other Senate Democrats in introducing a new act aimed at stopping what they charge is the “cruel and neglectful treatment of children at the border.”

In a statement issued July 12, Wyden said, “(President) Donald Trump has shown over and over he can't be trusted to protect and provide for the basic human needs of migrants — children, parents, families — many whom are fleeing persecution in their home countries. The brutal treatment of kids and families at the southern border must end. This legislation puts the guardrails in place needed to hold this monstrous administration accountable and ensure the safety and well-being of kids.”

More information on this act can be found at www.merkley.senate.gov/imo/media/doc/Border%20One%20Pager.pdf.

The Florence Lights for Liberty vigil concluded with the lighting of candles and a chorus of songs emphasizing peace and understanding, namely “Somos el Barco” and “This Land is Your Land.”

According to their website, Lights for Liberty’s mission is freedom. It emphasizes the end of Emma Lazarus’ sonnet “New Colossus,” which is inscribed on a plaque inside the Statue of Liberty: “Give me your tired, your poor, your huddled masses yearning to breathe free.”

Kent explained that she didn’t expect the vigil to result in immediate change. Rather, the point was to join with thousands of others around the world in amplifying awareness on what’s taking place in U.S. immigration detention centers so that judicial action can be taken. 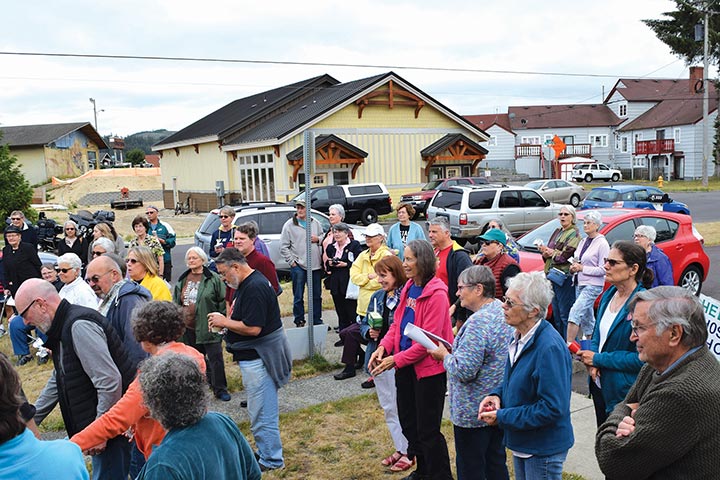