Along with the swearing-in of newly elected officials, the council discussed tax concerns

Jan. 25, 2023 (Dunes City) - Newly elected councilors took their oath of office during the Dunes City Council meeting held Jan. 18, which included a variety of discussions on topics ranging from the city’s limited tax base, its interactions with the State of Oregon and the role of community newspapers.

The meeting began with Mayor Sheldon Meyer, who ran unopposed in the Nov. 2022 election, swearing to uphold the laws of the country, state and city. Meyer continues his role as mayor, which he held throughout most of 2022 after the passing of Mayor Robert Forsythe last February.

Mellisa Stinson, who was sworn in last July to fill Meyer’s vacant council seat, was sworn in again, along with Rich Olson, owner of Darlings Marina and RV Resort. This is the first elected position for Olson.

Councilor Susan Snow, who also won reelection to the council, was absent, though the council voted to have her continue her role as Council President, as well as representing the Water Quality Committee.

When asked what topics would be covered, Mills said “A number of things, not the least of which is our trespassing person.” In October, Mills described an incident with a “neighborhood person that has grown up” in Dunes City that was kicking at the door while she was working alone at night.

But topics beyond law enforcement issues could come up in the discussions with Ceniga, including taxes. Mills also announced that effective Feb. 1, Oregon Liquor Control Board (OLCC) “will require annual liquor license applicants in Dunes City to first obtain the City’s recommendation and then submit the application to the OLCC.”

Later in the meeting, Mills submitted a sample application for the councilors’ consideration, which included a long list of personal information requirements, along with a fee.

Councilor Rory Hammond had concerns on the amount of personal information on the form, while Olson, who owns the only business with an OLCC license in Dunes City, questioned why a fee was even necessary.

“We initially applied for our OLCC license in 2015 and had to have the approval of Dunes City to start with,” he said. “I don’t understand what’s changing, other than it appears that I’m going to have to pay another licensing fee to the City.”

Councilor Robert Orr joked, “Well, how else are we going to get our revenue?”

Olson said it was a sore point. “You’re taxing businesses to subsidize the citizens — and the citizens need to start stepping up and paying their own property tax,” he said. “...They’re paying a Lane County tax, but they’re not paying a City tax. If you want to continue to put it all on the businesses, the next thing you know, you’re going to have absolutely no business in the city. It’s getting tough.”

Olson stated his business paid 42 percent of its income after state, county and city taxes.

“You start adding all of these licensing fees on top of that … and now you’re pushing 50 percent.”

He was particularly critical of Lane County taxes, stating that in 2015 his business paid $2,500 in taxes.

Stinson said she would like to take a look at smaller cities and see how they handle OLCC procedure.

“We’re talking about being what’s best for us. No offense to being a business owner, but we need funding that we need help with,” Stinson said. “If we can’t put back on the ballot that we want taxes, how else are we going to increase our funding? … I wasn’t saying it was an outrageous amount, but I think for due diligence we need to look at smaller cities and what they are doing.”

Olson quoted from the city’s budget on how much OLCC taxes he paid that went to the city.

Mills also brought up cigarette tax, which Olson said they were no longer selling “because that was $950 for a license” to sell tobacco, plus a tax increase.”

Stinson said she didn’t believe the City needed to have a fee, but again stressed looking at what other cities are doing.

One suggestion given by the council would be to have a simple application that resulted in a “yes” or “no” vote by the council. The conversation was put on hold until Mills could work on a consensus application. 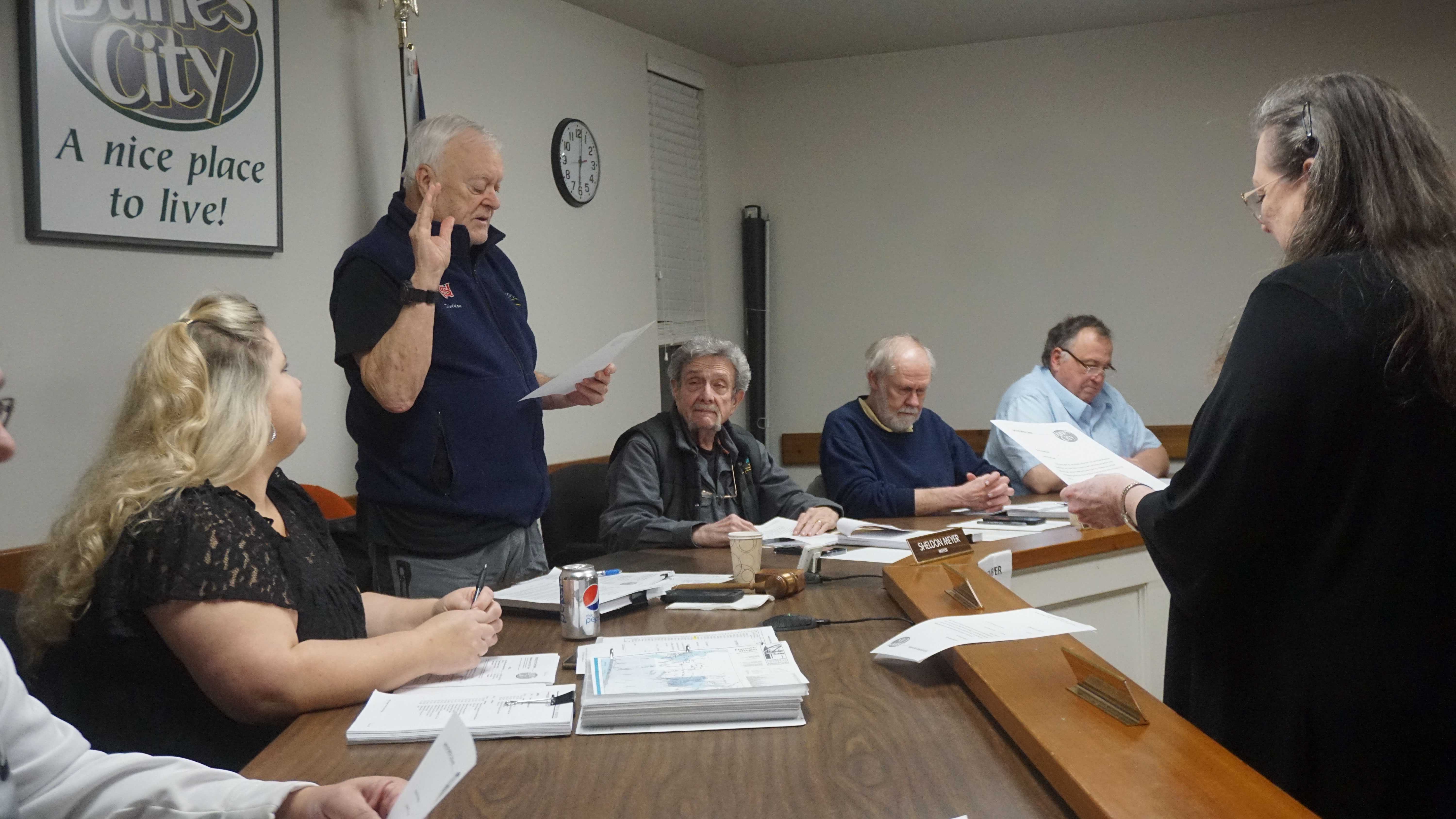 Taxes came up again as the council discussed the League of Oregon Cities (LOC) Legislative Priorities Ballot. In August 2022, LOC had asked cities to pick one representative to fill out an online survey, ranking priorities between 28 policy recommendations — the top eight priorities were sent to the legislature.

However, when Mills first introduced the ballot to the council during the meeting, it was thought that Dunes City could still vote on the priorities. It wasn’t until further inspection of the materials provided that they realized the ballot date had passed.

Hammond, who said he had attended a few LOC meetings in the past, did believe LOC provided a function in representing cities and providing training.

“I stopped doing it because I just felt like it was some state party line, and I didn’t think we had real representation,” he said. “I get kind of depressed and disillusioned with the process, and I was doing it regularly for about six months.”

Mills suggested that Hammond may have been attending conference calls for larger cities.

“There’s also small cities’ meetings, and that’s what we really are supposed to be attending,” she said, stating they are held every other month in small cities across the state. “Becky and I used to go to those all the time and make our opinions known, and it would go upstream the way it’s supposed to.”

But participation has since waned. Hammond stated that he would be willing to attend meetings as a private citizen, but uncomfortable representing the City, as his views could be different from other councilors' views.

“It’s a big deal how you do this, and we really need to have a plan for this,” he said.

In other news from the meeting, the council voted to create an ad hoc committee to help craft a traffic code ordinance that would be more in line with the City. The previous example the council was given was based on the City of Florence’s more complex codes.

Stinson, Olson and Hammon were chosen for the ad hoc committee.

After discussing a new lease on a printer, the council considered making a donation to the Siuslaw News Newspaper in Education program, which $30 can provide subscriptions to the newspaper throughout the school year.

Hammond believed families should be ordering newspapers but was not sure if it was the City’s responsibility to donate papers.

Councilor Tom Mallen agreed, saying “You may get some pushback on that. It’s a small amount of money, but some may say, ‘Why don’t parents just pay $30?’”

Orr, who works at Siuslaw High School, stated if the city did contribute, it would not only be supporting the kids, but the paper as a whole. He stated he would look into how much of a need and interest there was at the paper and would then contact the publisher to further understand the need.

In closing comments for the meeting, Orr welcomed Olson, and congratulated Meyer and Stinson. Hammond did the same, while adding he would like to hear a State of the City address from Meyer.

Stinson stated she looked forward to the upcoming meeting with Lane County officials, while Mallen suggested that Dunes City did not need to raise taxes on people, instead getting more taxes from the county.

Meyer also congratulated the election winners, saying, “I’m pleased to have some new faces here. I hope that you are as committed as it feels like you are. I think we’re moving along as a City, and I feel pretty good about where we are.”

Next chapter opens at Florence Festival of Books