April 27, 2019 — It was a journey of discovery at Siuslaw Elementary School as Gina Halpin’s fourth-graders showed their fellow students, invited family and community members their completed projects on Lewis and Clark’s Corps of Discovery. Besides teaching about national history, Halpin’s Lewis and Clark unit combined aspects of Common Core State Standards in literacy, geography and science.

“For the last three months, the kiddos have worked really hard on their Lewis and Clark projects,” Halpin said in a crowded hallway at the school on Thursday. “We are spotlighting four kids speaking this morning, and hopefully you’ll see Sacagawea in the speeches, another one about Seaman, Meriwether Lewis and William Clark. Our last player is Pompey the baby, but you’ll see him in the other speeches.”

The students’ projects and presentations highlighted the Shoshone woman Sacagawea and her son Pompey, or Jean Baptiste Charbonneau; leaders of the expedition Lewis and Clark; and Seaman, Lewis’s Newfoundland dog.

By the end of the section, Halpin said the kids were “experts” who could answer questions on a variety of topics.

“The Lewis and Clark unit lends itself to many academic objectives in all domains,” Halpin said. “This was in a sequence-of-events framework that encouraged the studying of state testing objectives in a fun and historical way.”

For the literacy requirement, students read nonfiction books showing different points of view. They also learned the timeline of the historic expedition.

“Have you heard of the Louisiana Purchase?” Noah asked during his presentation. “In 1803, President Thomas Jefferson bought land for a bigger country. He chose Meriwether Lewis to lead the expedition across the new territory. Part of his mission was to seek out the Northwest Passage, a waterway believed to connect the Missouri River to the Pacific Ocean. The journey was over 7,000 miles and lasted for two years.”

“Students were fascinated by how many states formed out of this purchase — and it provides a great transition to fifth-grade standards, in which students master the identification of our 50 states,” Halpin said. “In addition to literacy, the students also learned geography, directional routes, major waterways and the fact that Oregonians may not have been Oregonians had it not been for Jefferson’s purchase.”

The students incorporated historical facts in their projects, some quoting directly from Sacagawea’s account of her capture from her tribe and home as a young girl and her eventual purchase by and marriage to Toussaint Charbonneau.

“It is at this turn that my life will take another turn as the interpreter for the Lewis and Clark expedition,” student Emma said, speaking as Sacagawea in first person.

Emma said she first learned about the L&C expedition on a visit to Fort Clatsop, the winter encampment for the Corps of Discovery from December 1805 to March 1806, four years ago.

Besides her speech, she also brought in several artifacts to display with her project. These included a Native American doll, a beach grass basket, sage and a fan for cleansing ceremonies, a bone needle and a bow drill and fire board. Her mom Nicole even gave a demo on how the tools can be used to make a fire.

Two other students, Leo and Patrick, were also able to visit Fort Clatsop, located near Astoria, Ore., over Spring Break. In addition, one of them wrote a letter to Fort Mandan in North Dakota and received photos of the expedition’s earlier fort.

“It was fun seeing him compare the differences and similarities on his project board,” Halpin said.

In terms of science, students learned about the many new species of flora and fauna discovered by the expedition. They also learned about data collecting and research, and how the information learned led to the creation of new medicines and the protection of several species by the federal government.

The students were able to practice drawing examples of these new discoveries in their project books, which also contained bios on Lewis and Clark, “Wanted Posters” for crew members for the expedition, nature drawings of specimens and plants spotted on the journey and more.

“I wrote ‘Yes, read!’ on this one,” Erick said, showing one of the assignments he was particularly proud of.

Many of the students were particularly drawn to Seaman, the only dog to survive the entire trip.

“He was a real dog on the journey,” one student said.

The students relished the thought that the expedition crew ate more than 200 dogs over two years.

“But I could never eat a dog,” several stated.

Erick said, “I’m actually fostering a cat from the humane society. It’s 10 years old and it’s a girl and she is overweight.”

He said he would not want to take a cat on a journey that far, instead “I would take this guy (Seaman) because he has webbed feet” which make him good at swimming.

Tony’s presentation talked about Seaman’s bravery, and the fact that he needed surgery at one point. Tony also detailed the gear the expedition needed, including medical supplies.

Supplies lists, photos and drawings were part of the students’ displays, which included trifold poster boards, dioramas and even an edible fort made by Haylea.

“I took frosting and I took these cookies and glued them together. We weren’t allowed to use glue and I was making an edible one, so we used the frosting. And a biscuit covered in chocolate is the flag,” she said.

One of the parents added, “Haylee’s dad ate the roof off her project!” But Haylea said she hadn’t yet built the part that would have used the extra cookies.

Hailey M. said, “This teepee is made out of old jeans. It was painted. These pots are made out of clay. We bought all the little figures from the store. This was a canoe we bought at the store but it had a stick. My dad ripped it off and sanded it, and I painted it.”

There were also examples of the Sacagawea gold dollar.

Several of the students dressed up for the presentations, and Regan even wore a full Native American costume.

“Native peoples and the appreciation of culture and diversity was another common thread throughout this unit,” Halpin said. “Kindness and empathy are a focus that continues to manifest daily.”

After the four students presented, Halpin’s whole class was able to show their displays to visiting classes and their families. The projects were left up in the hallway for a few hours for more students to be able to see.

As Noah finished his speech, he said, “Lewis’ exploration had great significance and contributed to the expansion and discovery of the western United States.”

It’s a lesson that continues to be taught more than 200 hundred years later. 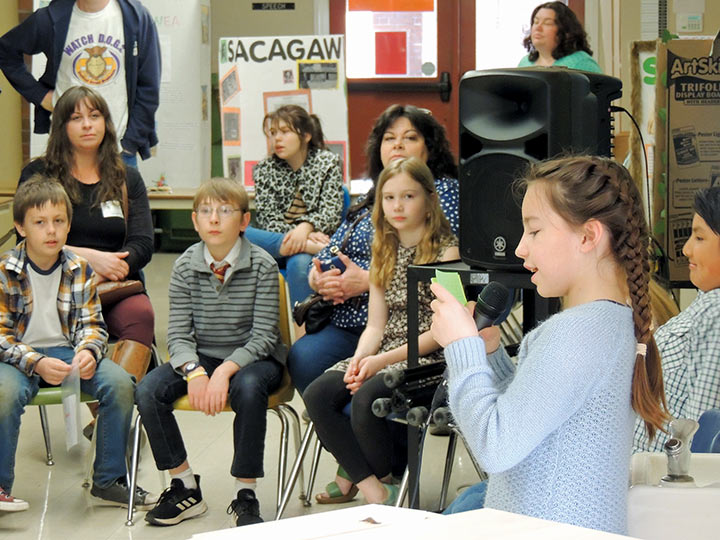 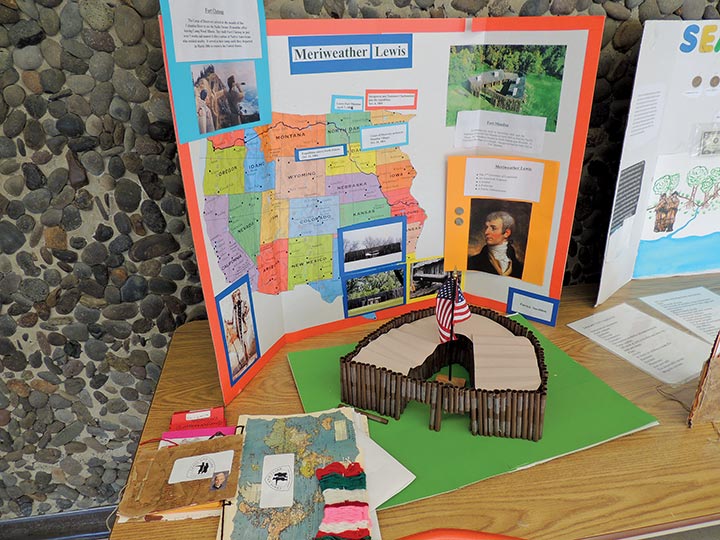 Florence Council does housekeeping, looks to next phases