The Lane County Board of Commissioners has selected Chief Deputy Cliff Harrold as the next Lane County Sheriff. 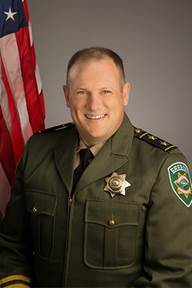 “I am humbled and honored by this opportunity,” said Harrold. “I have worked side by side with the men and women of the Lane County Sheriff’s Office for 28 years and look forward to continuing to serve our community together.”

Commissioners lauded Harrold for his commitment to the Lane County community and his acknowledgement of the importance of building relationships and seeking solutions for the mental health needs facing many of the individuals held in the Lane County Jail.

Board Chair Pete Sorenson said, “The board was unanimous in its decision to appoint Chief Deputy Harrold to this important position. We carefully reviewed both applicants and felt that because of this long-time involvement — from an Explorer to the number two position — in the agency he was more than qualified for this important post and will serve with distinction.”

Harrold was selected after a competitive application process and public interview before the Board of Commissioners. He must stand for election in 2020 in order to continue serving as sheriff.

Harrold has been a part of the Lane County Sheriff’s Office since 1990 when he joined the Law Enforcement Explorer Post at the suggestion of the local Creswell Contract Deputy.  After his high school graduation, he stayed active in the Sheriff’s Explorer Post and was hired as a 9-1-1 Police/Fire/EMS dispatcher by the Cottage Grove Police Department.  While serving as a dispatcher, Harrold worked towards completing his college degree.  Soon after receiving his associate of arts degree in criminal justice, he was hired as a deputy sheriff into the Corrections Division, working at the Lane County Jail.

He went on to expand his knowledge in the Police Services Division as a patrol deputy, which is where he found his passion for police work. There he had the opportunity to serve in Court Transport, on the Traffic Team and in Main Office Patrol.  He is trained as a SWAT operator and has worked as a Field Training Officer.

In January 2014, he was promoted to the rank of lieutenant, where he was responsible for a team of approximately 60 employees.

In May 2015, he was assigned as Acting in Capacity (AIC) Captain in charge of the Police Services Division. Harrold was selected as Chief Deputy in July 2016.

Harrold will succeed Sheriff Byron Trapp, who is set to retire on April 16 after 31 years of service.