Where Girl Scouts can be themselves

July 17, 2019 — Camp Cleawox has been a “home away from home” for generations of Girl Scouts since it was founded in the 1920s. Now, it continues to be a safe place for girls to spend a week every summer as they explore the Oregon dunes, learn essential skills and make memories that will last a lifetime.

Camp Cleawox is the smallest of three overnight camps in the Girl Scouts of Oregon and Southwest Washington (GSOSW) council. At just 63 acres, the camp is focused on Lake Cleawox, the Oregon dunes and the Pacific Ocean.

“I’ve always, both as a camper and as staff, felt that I can be myself here more than anywhere else in the world,” said GSOSW Outdoor Program Manager Allie Roberts. “I feel like I fit in, I met some of my best friends here and I’ve tried so many new things here. For me, it’s sort of a second home.”

According to Roberts, who goes by the camp name “Bee,” Cleawox is known as a water camp. She oversees GSOSW’s three overnight camps: Camp Arrowhead in Stevenson, Wash., is located between two mountains and Camp Whispering Winds in Philomath, Ore., is the council’s horse camp.

“They’re all very different and have a lot of different things to offer to all of our girls,” Roberts said. “Being on the coast at Camp Cleawox is definitely really special. We have some specific camps, like Ocean Explorers, where they go all the way up to the aquarium, do tide pooling, go to the beach and, since we’re right on the dunes, go sandboarding. It’s so special and you can’t get it anywhere else in the state.”

“It really is a reunion,” said Mealy, who goes by the name “Butterfly” at camp. She stood in front of the Camp Cleawox Lodge and welcomed attendees. “A lot of these people were counselors. I’m also the youngest of four daughters, so a lot of them worked with my sisters as well.”

Some of the visitors have known each other for multiple generations, as is the case with Mealy and Patti Luse, who said she has known Mealy since before she was born.

Luse is a member of the Order of the Silver Trefoil (OST), a group of men and women who have each been part of the Girl Scouts for more than 25 years. She has been a Girl Scout for 65 years and serves as the historian of Camp Cleawox.

She also seemed to know every person who walked by the lodge during the camp celebration.

“Everyone knows everyone in Girl Scouts in general. Everybody is welcome and we make sure that girls have a good time,” Luse said. “Girl Scouting is the best. In their troops, they have girls who are the same age or within a couple years. It’s a good way to learn how to be an older Girl Scout when you’re younger and have a role model.”

Mealy agreed. “I had good role models, and that’s why I’m here. I don’t think I could have all the life skills I have without being at camp,” she said.

She added that she has been coming to overnight camps since 2001, with many of those years at Camp Cleawox.

“My favorite memories are of cook outs, or meals out in the woods,” she said. “It’s always fun because you get some pine needles in your food as well. It’s just a little extra topping.”

There are 14,000 Girl Scouts across the GSOSW council, with 1,300 attending overnight camps this summer and 500 coming to Camp Cleawox. The camp serves 50-80 scouts a week, as well as the 30 staff members. These consist of administration, counselors, junior counselors and counselors-in-training. Camps began on July 6.

Roberts said, “I’ve tried more things here as a camper and as staff that you don’t get to try in your everyday life. You might get to go boating sometime in your life, but here you might get a tip-out of a canoe and learn how to safely get back in — along with kayaking, paddle boarding and windsurfing. One of my favorite things about Girl Scouts is that it is a safe place to fail. It’s one of the things we always talk about — it’s a safe place to take those risks.”

She told the story of one girl who struggled to get the hang of windsurfing and kept at until, by the end, she was helping teach the other scouts.

“We have that space where it’s OK to take a little while,” Roberts said. “Plus, then you’re being active in the outdoors and trying all these new things.”

The camp also has flat kayaks that are called “funyaks.”

“They can fit up to three people on them, but they are more likely to tip over,” said one counselor. “But that’s the fun.”

A camp administrator who went by the camp name “Oak” led a tour for visiting Girl Scouts contemplating attending Camp Cleawox this summer.

“This year, we’re focusing on STEM, so we have STEM in the outdoors, STEM-focused art and an adventure where we go orienteering,” Oak said, describing lessons based on science, technology, engineering and math. “We’re doing a great job of incorporating a lot more of the Girl Scout curriculum progression and mixing it in.”

She guided the group down newly-graveled paths to the Explorer, Pirates, Clippers and Buccaneers units at the camp. These units are where Girl Scouts sleep, cook and spend their rest time. Many of the sleeping buildings, called Adirondacks, are original to the camp’s 1930s Civilian Conservation Corps construction. Most of them have had at least minor reconstruction over the years, including the addition of American Disabilities Act-accessible ramps and closing off the buildings.

“The Adirondacks used to be three sided, but we’ve added more privacy so they are now all walled in,” said Mealy. “The girls really wanted more privacy. While we’ve updated them, a lot of them use original pieces.”

One of the camp visitors said her mother remembered the original buildings, since she was here when the Adirondacks were built.

“She remembers them as new and still smelling like fresh pine and fir,” the camper said. “I remember they were showing their age in the ‘60s, but hey, 30 years later and this kind of weather, and they’re still here.”

Up at the Buccaneers Unit, often reserved for older Girl Scouts due to its distance from camp, the sleeping units are yurts.

Oak continued the tour. “Camp is covered in signs like this that tell you where you’re going and how to get back from where you want to go,” she said, referring to the signposts at almost every trail intersection.

Each unit has a song, which are often sung during the all-unit campfires of each overnight camp week.

“We make a lot of noise,” Oak said. “Occasionally, there will be fishers over there (across Lake Cleawox) and they’ll clap for us at the end of our songs around the campfire, or sometimes we’ll sing for them, projecting loudly.”

Campfires, a quintessential part of summer, take place at the beginning and close of the camps.

In addition, each unit has a dedicated campfire area where scouts learn how to build a fire and cook. The girls have one cookout meal per day in these units, where they use Dutch ovens, portable stoves, propane and fires.

“We make it fun, make sure there is a variety of food and always adapt to dietary preferences,” Oak said. “This summer, we’re going to incorporate a lot more girl-led activities.”

This will include the girls in the units helping plan what to eat, working to prepare meals and cleaning up after themselves and others.

Camp Cleawox is staffed by the administration, camp director, counselors, junior counselors and counselors in training. By building in junior levels, girls have time to learn the ropes before they help lead younger scouts.

“By the time they are 18, they have this experience and are not being thrown in with no certain idea,” Oak said.

As an administrator and former camper and counselor, Oak has a lot of familiarity with Camp Cleawox and the way GSOSW runs things. She has been on staff with the Girl Scouts since 2002 after attending overnight camps since the 1990s.

“My goal is to have people like me on staff, who went here as a camper and in real life came back. They still want to be at camp,” she said.

Still, anyone can apply for jobs with the Girl Scouts.

“We all become Girl Scouts when we become a staff member, because anybody who works for Girl Scouts is a Girl Scout,” Oak said. “We all sign up. I personally am a lifetime Girl Scout, so I always have been, but there are some people who didn’t know Girl Scouts even existed, truly. Other than cookies.”

GSOSW also partners with Camp America to bring on international staff. This year, there are five members, mostly from the United Kingdom, and one can even speak Welsh.

“The girls really like it that they come and bring different accents,” Oak said. “It’s part of this global community.”

By being part of a global community, GSOSW is also keying in to what it means to be a Girl Scout.

“Discover what it means to be a GIRL (Go-getter, Innovator, Risk-take, Leader) and change the world,” official promotional material reads. “There is power in every GIRL. Unleash it at Girl Scouts.”

According to Oak, “Girl Scouts is adapting the policy that we will take anybody that identifies as female. We also recognize that some people may have a different pronoun than they visually resemble, or we have people who are unsure of their pronouns. We do a staff training talk on diversity and inclusion and introducing yourself, your name and your pronouns. It opens the way for somebody else to use them if they feel comfortable, and then nobody gets misgendered. Because that hurts.”

Roberts added, “All of our camp staff are welcome to wear (their pronouns on a badge) to make sure that campers feel comfortable and know they can share their pronouns with us, too.”

This small gesture can encourage more girls to join the scouts without fear of bullying or exclusion.

As Roberts said, Girl Scouts are about discovering who you are in a safe place. 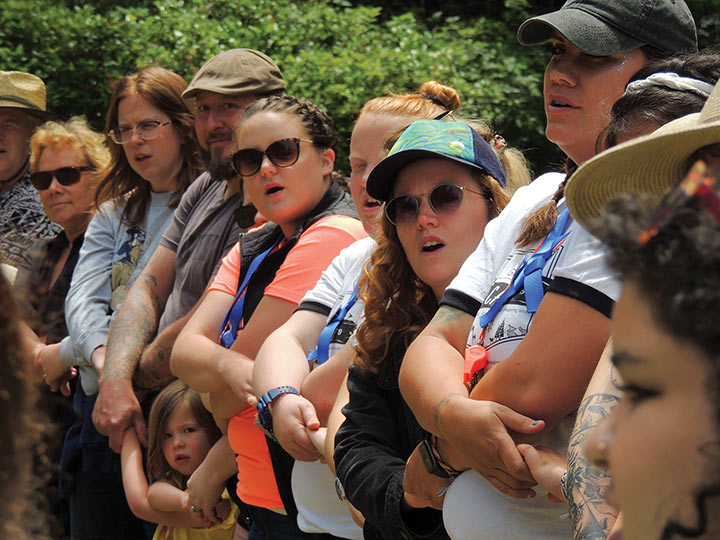 Pros and cons of Measure 106

Comfort from the cold