Another link between Florence and Eugene

Feb. 22, 2020 — A long-anticipated addition to the region’s public transit system began on Wednesday with the goal of providing an alternative to driving from Florence to Eugene.

The new Eugene to Florence Transit Route begins at the Amtrak Station in Eugene and travels downtown to Commerce Street before heading out to Highway 126. The bus stops in Veneta and Mapleton before working its way to Three Rivers Casino Resort, then making a stop at the Old Town Park on Bay Street before ending its outbound run at Grocery Outlet.

The trip takes approximately two hours and the Florence to Eugene route retraces the stops made on the bus’s outbound route. The trip costs $5 each way with a $1 ticket available to and from Mapleton.

The Lane Council of Governments (LCOG) is the managing authority for the new route as part of a larger more inclusive program designed to provide public transit options throughout the county. LCOG refers to the effort as LINK/LANE.

The program is being offered as a way for those that live outside of traditional transit corridors to have affordable access to public transportation.

The need for a public transit option for mobility challenged individuals, seniors and those that choose not to drive, was also cited as one of the primary reasons for the creation of this particular route in the LCOG Request for Proposals posted on Nov. 7, 2019.

“The route will provide a vital link in the statewide public transportation network and an option for people traveling between the valley and coast for medical, recreational, educational, shopping and personal needs,” the proposal stated.

The request indicated that the pilot program will be 18 months, with the potential to add an additional six months of service, pending funding.

“The pilot program will not only provide a service but also serve as a gauge for the viability and sustainability of possible future public transportation projects in the area,” it concluded.

Kelly Clarke, Senior Transportation Planner for LCOG, made a presentation in January to the Florence Transportation Advisory Committee which detailed the process behind the decision to initiate this particular route.

“LCOG conducted a feasibility study in 2018 to evaluate the need for this bus route and found this gap in a public transportation option needed to be filled,” she said.

Funding comes from a statewide payroll tax, HB2017, which created dedicated to enhancing transit service across the state.

The response from customers to the introduction of the LINK route has been positive, according to Clarke.

“We have heard from numerous potential riders that they have been waiting for years for this service,” she said. “They are now eager to use it to get between the valley and coast for all types of trip purposes including visiting friends, family and recreational destinations, medical and personal needs and just not having to drive.”

Data will be collected during the initial run of the program, which then will be analyzed to determine usage levels and future funding of the route.

As the program begins, there is only one bus being used to serve customers although two more buses will be introduced into the mix by the end of the year.

Clarke added that LCOG and the Confederated Tribes have been awarded federal grant funding to purchase a second bus for this route.

“LCOG is also in the process of acquiring a bus that can be used for both routes from the Rogue Valley Transportation District. The Florence-Eugene grant funding included addition of a mid-day round trip and this will be integrated into the service once the buses are available,” she said.

Clarke encouraged riders and those with questions to view lcog.org/1068/Public-Transit and contact LCOG with suggestions or issues regarding the new service.

The Eugene-to-Florence Link Service operates seven days a week, from 8 a.m. to 7:35 p.m. except federal holidays. The fare for a one-way trip to or from Eugene is $5. Fares between Mapleton and Florence are only $1. Drivers do not have change so exact change is needed for transit.

Tickets can also be purchased prior to riding the route at River City Taxi, 1699 Pine St. in Florence. 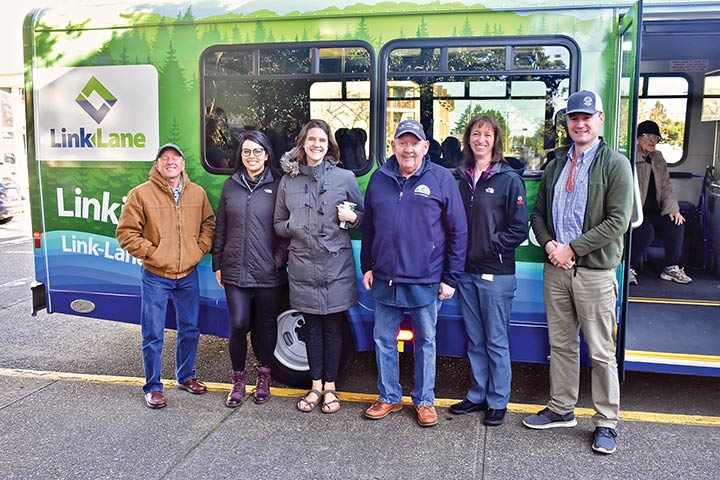