Aug. 5, 2020 — Clear Lake Blueberry Farm is a small, family farm owned by Duane and Debbie Cray. The couple grows nine varieties of blueberries and opened their property to this year’s seasonal pickers this past weekend, with customers already in line when the gates opened at 9:30 a.m. — some specifically timing their visit to the area coincide with the farm’s opening day.

This is the fourth season the Crays have owned the Clear Lake Blueberry Farm, having moved here in 2016, and the delicious fruit produced on the property has drawn customers from around Oregon and the Northwest.

The story of how the Crays ended up in this part of the country is a familiar one to many here: They initially came for a visit, really liked the people and the land, and decided to make it their home.

They looked at properties and the last place they looked at was the Clear Lake Farm. The cou-ple made a quick decision and became the farm’s latest owners.

Duane had retired from Shell Oil Company after 36 years, with he and Debbie settling here never having run a business of this type — but discovered they liked the work that goes into growing crops for sale. Over the past few years they have worked to improve the number of varieties and increase the harvest of the plants under their care.

Though National Blueberry Month was in July, the calendar doesn’t determine when the fruit in this area becomes ripe. During the month of July, the berries at Clear Lake were still green.

“The season is starting a little later this year, there hasn’t been as much rain and it looks like the first few weeks of August will be our peak this year,” Debbie said during a Saturday run-through for the season. The Crays don’t use pesticides and also are tolerant of the birds and bugs that eat at their farm.

The land at Clear Lake Farm is naturally sheltered by a sloping hill and the nearly 600 blueberry bushes under cultivation have started to turn the perfect shade of blue. The Crays are not aggressive in deterring pests and the idea of a more integrated way of approaching business is evident.

The Crays charge $2 for a pint of blueberries and when asked how they can charge so little and make money, they both responded with big smiles and looked at each other before Duane said  quietly, “We don’t really make money, we just hope we can kind of break even — and that’s ok for now,” he said. “We have talked about raising our prices, but Debbie thinks it is a tough time to do that to our customers.”

The Cray’s are very aware of the COVID-19 related challenges posed to visitors to the farm and have changed the way customers can purchase and pick their berries.

“We have posted on our Facebook page, asking customers to bring their own containers, we also have sanitizer and will weigh their containers so they can pick and just take the container home,” Debbie said.

Masks are recommended at the farm and there is a good deal of space to allow pickers to spread out.

Debbie is the more talkative of the Crays, as Duane tends to the plants and also works on the new barn and studio the couple are building.

They have plans to expand the farm and eventually incorporate music and a wider assortment of food for visitors to purchase. All of those plans are on hold as the COVID pandemic has pressed the pause button on the growth the couple had hoped to complete.

They have made some progress, finishing the new barn to hopefully increase future sales.

“We built a chicken coop and maybe in a year or two we will have eggs for sale too,” said Debbie.

Of course, by that time they will have spent a considerable sum for the new coop, Duane pointed out, smiling again, in addition to costs like fencing, food, medicine and other chicken-related needs

But making money is not the ultimate goal for the Crays, who are content to slowly build a customer base while improving their land and the quality of the fruit their land produces.

The interest in the health benefits of high-level antioxidant foods like blueberries continues to drive scientific research into the tart, indigo fruit.

And the number of visitors to Clear Lake grows each year as well.

The importance of the blueberry crop to the overall economy of Oregon is significant and has been rising each year since 2009, when the state produced 47.2 million pounds for consumption.

In 2019, production figures show a total more than three times higher at 153 million pounds harvested, according to the Oregon Blueberry Commission.

This annually increasing tonnage was grown by only 330 growers.

The first pickers of the season at Clear Lake Farms on Saturday came from as far as British Columbia, Seattle and Portland, along with a number of area residents.

There were couples and families excitedly spilling out of shiny SUV’s with obvious excitement as they walked among the tall blueberry laden bushes.

The deep color — or more ripened — blueberries is due to their high levels of anthocyanin, which is a flavonoid that has been identified as having beneficial effects on many bodily systems related to circulation, cognition and energy levels.

America is the world’s leading producer of blueberries and more than 700 million pounds were grown for consumption in 2019.

For more information about Clear Lake Blueberry Farm, the Crays post regular berry updates on the farm’s Facebook page and are hoping to remain open for about five more weeks this season. 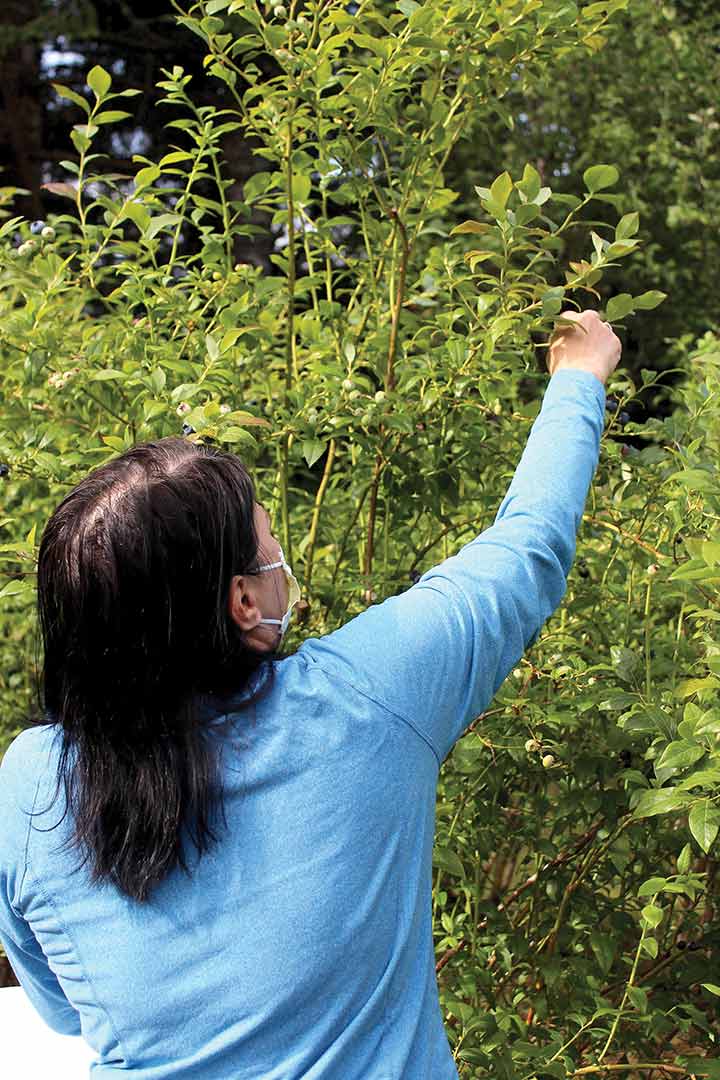